Taichung City is known as Taiwan’s resourceful, industrious heart (claim to fame: Giant bicycles and boba/bubble tea). Its artistic side, however, will surprise you.

Taichung may not be as vibrant as capital city Taipei, but while visiting design hotspots and other Taichung attractions across two days, I sensed an undercurrent of sophistication that I’m sure fellow creatives will appreciate. Here are some hip places to visit in Taichung, plus things to do in Taichung if you’d like to explore its art and design scene.

I had an amazing time in Taichung thanks to expert local driver and guide Mr. Wang (email hidden; JavaScript is required). He’s a certified tour guide who can drive you all around Taiwan and provide invaluable insight. If you speak and understand Mandarin, look for him!

In Chinese, Shenji New Village (審計新村) literally means “audit village” – a name from the 1960s when this place served as dormitory housing for government workers. Today, however, it’s a pretty little cluster of shops selling things like craft beer, handmade paper, and entire wheels of cheese.

What I loved about Shenji Village, though, was the architecture. Flights of creaking metal lead the way to narrow walkways along the second floor of the old blocks; there’s also a little bridge connecting two of the blocks. Against a backdrop of brand-new skyscrapers, Shenji Village is a sweet little hideout.

From the outside, the National Taichung Theater (臺中國家歌劇院) appears to be a simple concrete-and-glass building. Mr Li, my guide for the NTT guided tour, quickly fixed that first impression by declaring: “The National Taichung Theater has been labeled one of the most challenging structures to be built in our time.” It certainly doesn’t look like something that took 11 years to build – until you step inside.

There isn’t a single column in the building. The vase-shaped outlines seen on the facade actually reveal a cross-section of impossibly fluid structural walls, and they all merge into a massive gyroid block. As a minimalist I fell for the clean, organic forms of the theater, while a fellow visitor simply fell (okay, he stepped) into an ankle-deep pool of water around the lift lobby. Who expects pools and streams inside a building? Toyo Ito, apparently.

Pritzker laureate Toyo Ito came up with NTT’s design in 2005, but the building was only partially opened in 2014 and officially opened in 2016. The drama behind its construction seems apt, considering it is the city theater: after Ito won the competition to design this building, the project underwent five rounds of bidding – and no one wanted to take it on.

Most construction companies estimated, rightly, that they would be building this at a loss. Eventually, Taichung developer Lee Ming Construction decided to do it – perhaps as a matter of local pride,” claims Li.

The building was pieced together from 58 individually shaped and formed tubes of steel and concrete, and one of these “cores” sits on display at the front of the building. 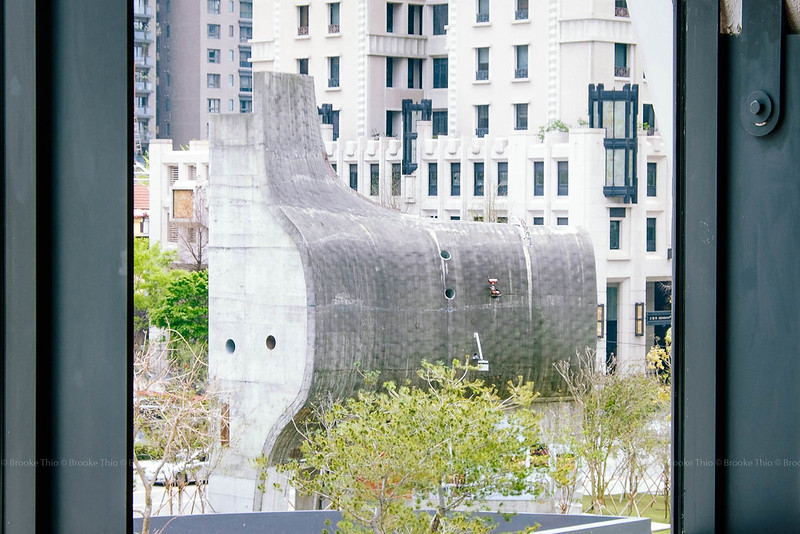 Each detail of the building is so well-considered that you won’t even notice it without an insider’s help, which is why I recommend the guided tour – it costs just TWD 100 (USD 3.50)! Li pointed out not just the best photo spots, but also cleverly integrated water screens and sprinklers, in-floor ventilation systems, and even the coolest-looking restroom I’ve seen in a while. Do note, however, that the guided tour doesn’t provide access to the Grand Theater and Playhouse; you’ll have to buy tickets to an actual performance to enter.

The National Taichung Theater is simply one of the most unique places to visit in Taichung. It also hosts several fine design stores and kiosks, and I recommend dining at VVG Can Play, where you’ll get a front-row view of the surroundings. The western cuisine is also a nice change from the prevailing Taiwanese street food and local delicacies.

Much as I love local food and culture, when it came time for a mid-afternoon treat, I chose ice cream and waffles over Taichung’s renowned suncakes. After all, it was my Taiwanese host who recommended Miyahara Optometry (宮原眼科) and Fourth Credit Union (第四信用合作社):

Both these cafes are located close to each other in Taichung’s original old town district, nicknamed “Little Kyoto” by Japanese colonialists when they first developed the city at the dawn of the 20th century. As their names suggest, Miyahara Optometry was once an ophthalmologist’s practice, while Fourth Credit Union was a bank. Both shops’ original interiors have been conserved and restored, lending a tasteful bit of retro glam to their modern form.

As a proud “Waffle Monster” (with my own waffle iron and secret recipe for regular and yeast-leavened waffles), Fourth Credit Union was like Disneyland to me. Enveloped in the blissful aroma of waffle batter, I darted around photographing everything, took ages to choose just one flavor of topping, and then went a little insane over the industrial waffle iron on show.

Having sampled the goods, though, I’d say both these cafes will satisfy interior design (and Instagram) fanatics more than actual foodies. If you’ve filled your Instagram feed but not your stomach, Section 2 Ziyou Road (just one street down from Fourth Credit Union) is lined with over a dozen decades-old suncake bakeries. 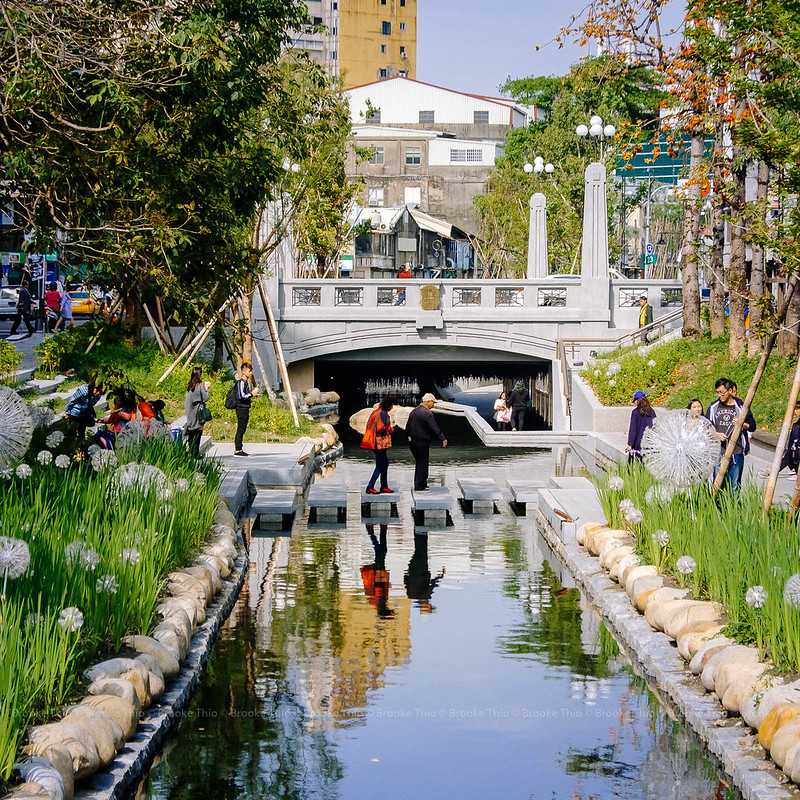 Another novel attraction in Taichung City is Lüchuan stream (綠川), which you should see if crossing between Miyahara and Fourth Credit Union. This little stream has been primped à la Seoul’s Cheonggyecheon and turned into a walkable park and cooling hideaway for hot summer days.

View all the places mentioned in this post (and more) on my Taichung map!

If you’re going beyond Taichung city to explore all of Taichung county, check out this Taichung guide by The Blessing Bucket for more Taichung attractions to add to your itinerary.

Entering Natural Way Six Arts Cultural Center (道禾六藝文化館) is like entering another world, albeit a small one. A Japanese aura emanates from the place: it is a former dojo, or martial arts training center, after all.

Built in 1937 for both police officers and prisoners, Natural Way Six Arts Cultural Center is now a place to dabble in Japanese cultural pursuits like tea appreciation, kendo swordfighting, archery, calligraphy, and more. However, I simply walked around the garden and let the calm wash over me.

While you’re there, make sure to get some ice cream from the Feeling 18°C booth in the garden. Mr. Wang claims this specialty chocolate maker based in Puli (Nantou county) makes far better ice cream than Miyahara – and this is the only branch in Taiwan!

For over 80 years before its reincarnation, the sprawling 5.6 acre Taichung Cultural and Creative Industries Park (台中文化創意產業園區) – quite a mouthful, I know – was Taiwan’s largest brewery, brimming with the heady fumes of rice wines. Today, however, the park is home to art galleries and design studios where you can shop for cool made-in-Taiwan souvenirs, or simply make your own with the many hands-on classes and workshops available.

Compared to the cultural/creative venues in Taipei, this place was far less crowded and I felt like I could properly explore the place. It’s a shame their website is entirely in Chinese, but here’s an example of activities you can join:

Rainbow Village: from fame to overtourism

Including Rainbow Village (彩虹眷村) in this list was quite the dilemma. This colorful village has an epic tale behind it, featuring hero “Rainbow Grandpa” Mr Huang Yung-Fu. Having retired after decades of working as a soldier and security guard, Grandpa Huang had saved up to buy a house in a military veterans’ village in Taichung – only to find out in 2010 that the village was to be demolished.

Knowing this, Grandpa Huang began to doodle on the village’s exterior walls and grounds for fun. In a stroke of fortune, professors and students from nearby universities discovered his vivid, whimsical works and eventually lobbied to Taichung City for Rainbow Village to be preserved as a cultural asset and tourist attraction.

Unfortunately, in the age of Instagram, this proved to be a blessing as well as a curse.

The moment I arrived at Rainbow Village, I’d lost all interest in it. The modest plot of land was swarming with people wielding selfie sticks or hogging entire walls, some shouting to their friends to catch up, few actually looking at the artwork. Inside the narrow lanes, people filtered past as Grandpa Huang, now 96 years old, sat placidly behind a counter of souvenirs.

“It’s always like this here, no matter what time of day you visit,” shared Mr Wang. “You just have to go with the flow.” Grandpa Huang certainly seemed delighted to have so many visitors to Rainbow Village, but how many visitors actually spoke to him, or knew the story behind his creative feat?

I’m certainly not against taking photos, Instagram or otherwise, but if you do visit Rainbow Village, I hope you can take the time to admire Grandpa Huang’s work and say hi to him – he lives here, so he’s always around. A little etiquette in not hogging photo spots or making too much noise also goes a long way.

Every city in Taiwan boasts a greasy handful of suppertime night markets, and Fengjia Night Market (逢甲夜市) is supposedly the largest night market in all of Taiwan. Indeed, it’s not so much a night market as an entire shopping district – instead of being channeled through narrow lanes flanked by street food carts and game stalls, I was drifting along spacious streets with actual buildings and storefronts. 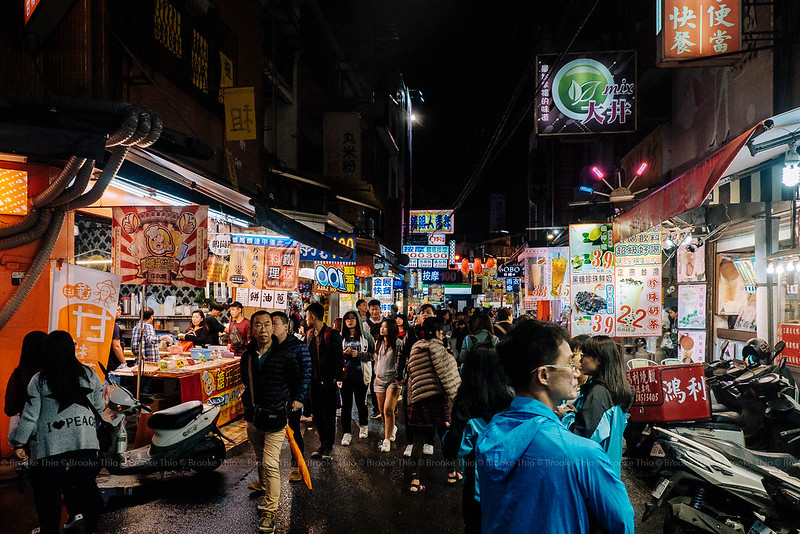 This isn’t exactly an art/design spot, but the vibrant colors and flavors of Fengjia Night Market are no doubt an essential part of Taichung. The creative street food on sale will surprise you and, at the very least, you’ll have some mouthwatering pics for Instagram. Stuff yourself before you leave, and don’t forget the bubble tea.

What else would you like to know about Taichung? If you’ve visited before, would you recommend any other creative things to do in Taichung?

Go to Appearance > Customize > Subscribe Pop-up to set this up.
Send this to a friend