Taiwan's "Harbor City" is more exciting than ever 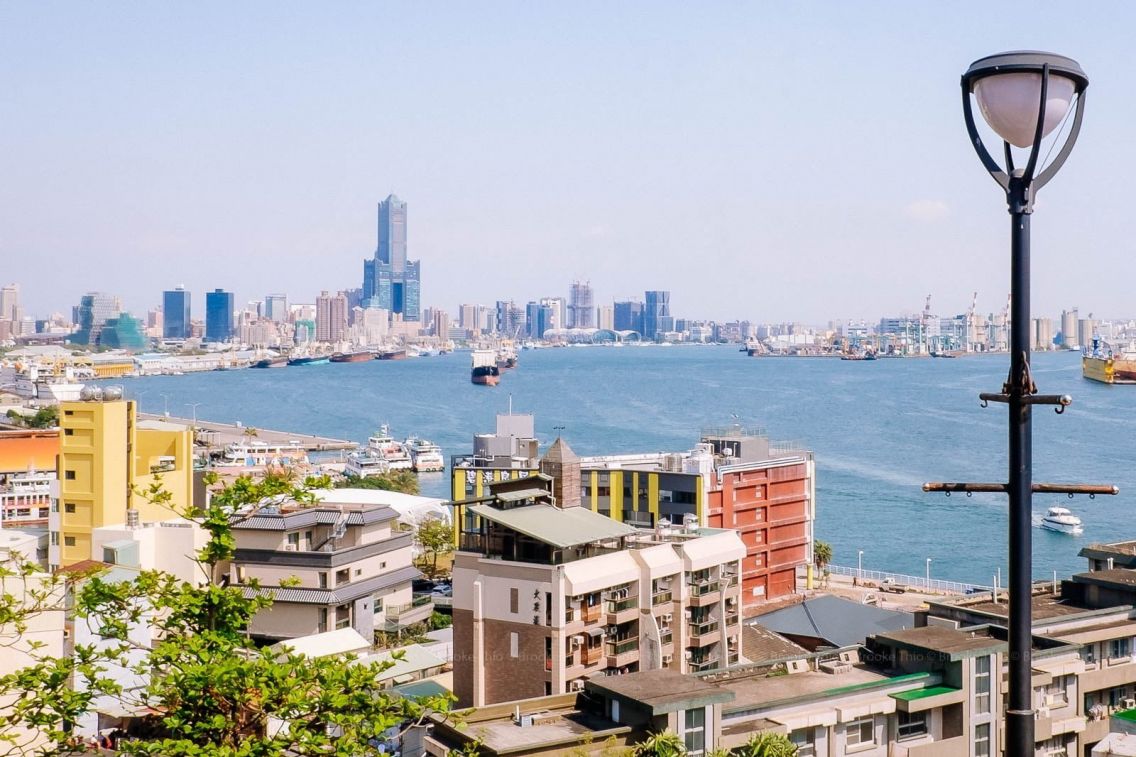 On my first visit to Kaohsiung (高雄市) in 2013, I barely saw anything of the harbor besides cargo ships and cranes. The only exception was the Kaohsiung Exhibition Center, then a brand-new building that opened onto a sliver of waterfront lawn – and was sealed off by construction hoarding on both sides.

Fast-forward five years to 2019…and the entire Kaohsiung Harbor has been transformed. Today, with people jog and walk their dogs along the panoramic waterfront, while the harbor thrums with energy fueled by a pop music center, art districts, craft breweries, and more.

In this guide you’ll discover the story behind Kaohsiung Harbor’s transformation, and see how you can explore it by riding the Kaohsiung Light Rail!

A harbor city that had no waterfront

Why is Kaohsiung Harbor only just seeing all these developments? Simple: Kaohsiung’s port has been (and still is) one of the busiest in the world. Back when Taiwan was under Japanese rule, the colonial government dredged Kaohsiung Harbor to make it deeper, reclaiming land that now forms the waterfront district of Yancheng and Hamasen.

But…they then built a long wall closing off the waterfront to ordinary citizens, restricting access to port workers.

It was only in 2003 that the walls of Kaohsiung Harbor were finally torn down, revealing the busy piers and waterways that lay beyond. Since then, Kaohsiung’s city government has been bargaining with the port authorities to redevelop a small section of the waterfront. Look at these maps below to see what I mean:

Kaohsiung Port has 122 piers, of which only the small highlighted area has been redeveloped. This is where the Kaohsiung Light Rail traces the harbor, and where many Kaohsiung attractions are found. The long strip at the top is Cijin/Qijin Island (旗津).

The beauty (and controversy) of the Kaohsiung Light Rail

Excuse me for geeking out here, but the Kaohsiung Light Rail is unlike most other trams. For starters, it’s catenary-free: meaning there are no ugly power lines running above the track. More interestingly, it doesn’t use ground-level power supply either. Instead, Kaohsiung’s trams use supercapacitors and batteries to rapid-charge at each station so it can zip on to the next.

Sadly, the Scenic Fantastic is just my name for this sweet system. If you asked a local, they might call it a Crawling White Elephant instead. I’ve personally had Kaohsiung residents complain to me – a tourist – about how it’s too slow and a waste of taxpayers’ money because only tourists ride it.

I honestly do enjoy getting around and observing the city while sitting in the comfort of a tram or streetcar, and I feel the Light Rail adds to Kaohsiung’s appeal without subtracting from its essence. So I highly recommend riding the Scenic Fantastic to discover some of the best things to do in Kaohsiung!

Along Kaohsiung Harbor, the Kaohsiung Light Rail stations are numbered in the opposite direction of the pier numbers. This guide follows the station numbers (C1-14), as there will be more stations opening in future. If you like, you can also view/save this guide in map form.

The Kaohsiung Light Rail fare is just NT$10 per trip, regardless of distance. Fares can be paid with a tap of your EasyCard/iPASS fare card, either at the station or on the tram.

The Kaohsiung Light Rail actually begins at Lizihnei (C1),  but Cianjhen Star forms an interchange with Kaisyuan Station on the Kaohsiung MRT Red Line. This is the best place to board the Scenic Fantastic.

Shopaholics and families might just end up spending the whole day at C5 Dream Mall without going any further, since this is the largest mall in East Asia. With a whole bunch of indoor play parks and the Kaohsiung Eye Ferris wheel, young children can really have a blast here.

Don’t let the name fool you: Software Technology Park is where you’ll want to stop to visit Kaohsiung’s container mall, KUBIC (which happens to be conveniently located across the city’s IKEA store). Honestly, I found it contrived and would only recommend it if you’re looking for a colorful Instagram backdrop.

Walk one block down and the mood changes instantly as you meet the imposing grey warehouse that is MLD. Short for Metropolitan Living Development, this upscale mega-mall was once an aluminium factory but now features a market hall, a massive bookstore, and classy restaurants.

There are several restaurants and bars here, but if you’re looking for a place for a romantic night out, Belon Oyster Bar & Bistro is where you can tuck into the finest, freshest seafood and enjoy dramatic sunset views.

As you ride on, you’ll also pass the Cruise Terminal (C9) station that’s currently under construction, but should open by the end of 2019.

Glory Pier and Love Pier mark both sides of the Love River bay. This is the center of Kaohsiung Harbor’s most exciting development: the (wait for it…)

This multi-syllabic name, in reality, refers to a series of buildings around the entire bay. These include: the giant alien honeycomb that will serve as a pop concert venue, the low wave-like building that will house a marine culture exhibition center, and the six cute “whales” which are multi-purpose halls.

While only the “whales” have been completed, it’s anticipated that the rest will be ready to welcome the world by the end of 2019. Right now, you can enjoy the view with a stroll around the bay from Glory Pier and across Lingyaliao Iron Bridge to Love Pier – or sit back and enjoy the view from the tram!

Have you heard of wenchuang (文創)? The term, which is short for “cultural-creative”, was coined to represent Taiwan’s “cultural and creative industry”, but is often used to describe the modern East Asian design aesthetic. I wouldn’t equate it to “hipster”, though – wenchuang is very much a big part of Taiwanese culture.

Every major city in Taiwan has at least one officially designated “cultural and creative district”, and Pier-2 Art Center is Kaohsiung’s. Quirky sculptures and street art murals have brightened up this series of former warehouses located along Dayi and Penglai area; the buildings now house art studios, exhibition spaces, indie boutiques, and plenty of cool restaurants and bars. Check out the map for my favorites!

If you have the time, walk further north along Qixian 3rd Road to find tasty local eats and traditional markets. This is a great neighborhood to stay in while you’re exploring Kaohsiung.

Looking for places to stay? These are the most fantastic boutique hotels in Taiwan, including Kaohsiung.

Buildings with a distinctively Japanese flair dominate the streets at Hamasen (C14), which was the center of Kaohsiung’s modernization back in the late 19th century. In fact, the buildings of Sinbin Old Street were built before 1945 and survived the US Army bombings of World War II.

There are several restaurants and tea houses here, and my favorite is naturally Café Hifumi. This traditional Japanese-style tea house and bookstore emanates a tranquil literary atmosphere you’ll find in many of Taiwan’s cafes. Come here on a weekday afternoon and you might just get the place all to yourself.

While at Hamasen, you should also pop by the Takao Railway Museum, which showcases what life was like at the former railway station in the heyday of Kaohsiung’s industrialization.

British Consulate at Takow: English high tea with a view

Not just any high tea, mind you – it’s high tea with a panoramic view of Kaohsiung Harbor, at the British Consulate at Takow. Wait, what’s Takow?

Takow was the original name of Kaohsiung. It means “bamboo forest” in the aboriginal Makatao language but, with the characters used by Chinese settlers, became “dog-beating” (打狗). It was the Japanese colonial administration that gave the city the more pleasant kanji of “Takao” (高雄), which means “tall hero”…but is read in Mandarin as Kaoshiung.

To have your cake (well, scone), you’ll have to work off the requisite calories with a knee-destroying climb up from the Consular Office located at the foot of the hill up to the Consular Residences.

The Consulate buildings were built by the British Royal Engineers and completed in 1879, becoming the first official British Consulate in Taiwan. After Taiwan came under Japanese rule, however, the consulate was closed in 1910 and later used by the Taiwanese government before being restored as a heritage site in 2003.

**The British Consulate at Takow is a 20-minute walk or bus ride from Hamasen Station. Website & hours

Purchasing your Taiwan High Speed Rail (THSR) tickets online will net you a 20% discount: you can buy single tickets from Taoyuan or Taipei Main Station to Kaohsiung (Zuoying HSR station). If you’re traveling around Taiwan, however, the 3 Day THSR Pass or 5 Day Train Pass is a better deal. **Taoyuan HSR Station is a 20-minute ride from TPE airport via the Airport MRT line.

If you’d like more destination inspiration, visit our Taiwan page. Or, check out:

Join us on the wild side.

You know the reality: travel is messy, spontaneous, and filled with wacky episodes (ever force-stuffed a 12" pizza into a daypack so you could get on the subway?)

Get our free checklists, planners, travel deals, stories — and be part of our wildly curious community.