Just a quick hop from Seoul, Gangwon-do (Gangwon Province) is one of the most beautiful and thrilling outdoor destinations in Korea.

Gangwon-do has a fascinating history. First of all, you should know that it’s the northernmost province of South Korea, bordered by the DMZ and the North Korean province known as…Kangwon-do.

Yes, both provinces have the same name (강원도) and used to be a single province before the division of Korea in 1945. That’s why this guide includes attractions and activities in the North Korean province as well; they will most likely be a part of your itinerary if you visit North Korea on a tour.

With the Taebaek mountains cutting along the eastern coast, Gangwon Province’s inhospitable terrain has made it one of the least developed regions in Korea. Past the rocky range, however, waits the blue and bountiful Sea of Japan/East Sea. You know what this means: highland scenery, wild havens, and splendid coastlines for those who love nature and the outdoors.

Want a visual reference to browse with this guide? View+save my Gangwon-do map, and read on.

Namiseom is a small half-moon shaped isle, known for its romantic setting: you’ll find walking paths lined with colorful metasequoia, ginkgo, cherry, birch and more. A day tour from Seoul to Nami Island will provide you with plenty of Instagram photo ops.

As a nature and creative retreat, Nami Island is home to a handicraft studio and “learning center” where you can also try making paper and dyeing textiles using natural materials. But where’s the adventure in this, you ask?

It’s when you get to Namiseom – by riding the 80-meter-high Nami Skyline Zipwire from Gapyeong Wharf! 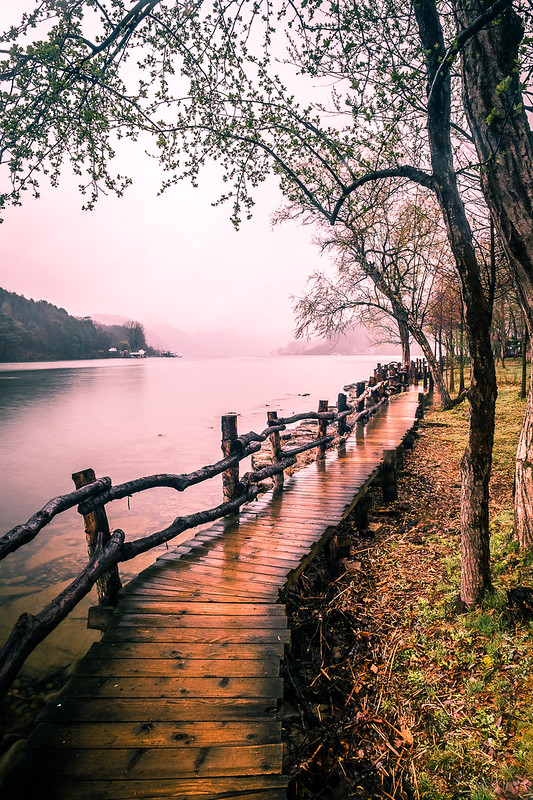 Make it happen: Book a shuttle bus departing from various locations in Seoul. Alternatively, take the Seoul Metro Gyeongchun Line to Gapyeong station. You’ll find signage for a shuttle bus to Gapyeong Wharf, where you can zipline (KRW 44,000) or ride a ferry (KRW 13,000) to Nami Island.

Got questions on Seoul’s public transport? Get all the answers here.

Ride the DMZ Peace Train on the Cheorwon Security Tour

Intrigued by the history of the Korean War? KORAIL actually runs two DMZ Peace Train services from Seoul. With the Cheorwon Security Tour, you’ll take the train from Seoul to Yeoncheon before boarding a bus for the tour, which requires special access into the Civilian Control Zone (the buffer zone before the DMZ).

Some highlights of the tour include the former Korean Workers’ Party Headquarters, now a ruin riddled with bullet holes, and Woljeong-ri Station, the last station before the Gyeongwon line crosses into North Korea. What truly struck me was that people still live here, tending to their rice paddies which purportedly produce the best rice in Korea.

Before, you’d be able to take the DMZ Peace Train all the way to Baengmagoji Station, the northernmost functioning rail station in South Korea, and join the tour from there for KRW 18,000 (this blogger shared his experience in detail and even spotted endangered red-crowned cranes!) However, the train currently terminates at Yeoncheon Station due to maintenance works and should reopen December 2018.

Make it happen: Due to rail line upgrades, it’s best to enroll for the tour in person at Seoul Station (KRW 45,000, train+tour).

Go hiking in the (endless) mountains…

82% of Gangwon-do is mountainous terrain, so it should come as no surprise that Gangwon province is where you’ll find popular hiking spots like Seoraksan National Park (nearest city: Sokcho). Hiking Seoraksan in autumn might just be your most rewarding experience as you immerse yourself in magical fall foliage.

If you prefer a more leisurely experience, this Seoraksan day tour from Seoul gives you the option of a quick day hike or a cable car ride up Seoraksan and also includes a visit to Naksansa temple.

Odaesan National Park is closer to Gangneung, and while it features some spectacular views in autumn, it’s better known as a holy site in Korean Buddhism; the main temple here, Woljeongsa, is a head temple of the prevailing Jogye Order.

Make it happen: For Seoraksan, take bus #7 or 7-1 from Sokcho Express/Intercity Bus Terminal and alight at Sogongwon. For Odaesan, take the KTX to Jinbu station. From nearby Jinbu Bus Terminal, take a local bus bound for Woljeongsa Temple or Sangwonsa Temple.

…And skiing or snowboarding in winter

PyeongChang county is home to the best ski resorts in South Korea, with the much-lauded 2018 Winter Olympics held here. Ski enthusiasts should head to YongPyong Resort with its 31 slopes across four zones; the resort also offers nighttime skiing up to 00:30.

For families and beginners, Alpensia Resort is a more well-rounded choice. Besides having multiple ski slopes for various skill levels, it also boasts an alpine coaster, a sprawling indoor water park, and two golf courses for summertime.

Make it happen: Both resorts are located near Jinbu Station on the KTX Gangneung line, but there are no convenient transport options available yet (besides taxi). The best way to get there is by booking the direct shuttle bus or private van from Incheon Airport or Seoul.

Get an extreme sports overdose in Inje

While high-adrenaline activities are available throughout Gangwon-do, Inje offers the best of them. River rafting and kayaking? Go to Naerincheon. Via ferrata on a cliff above a river? That’s Maebawi Rock for you. Bungee jumping and paintballing are also on the menu.

Make it happen: Unfortunately most tour operators offering these sports have Korean-only websites, with the exception of XGAME Resort. 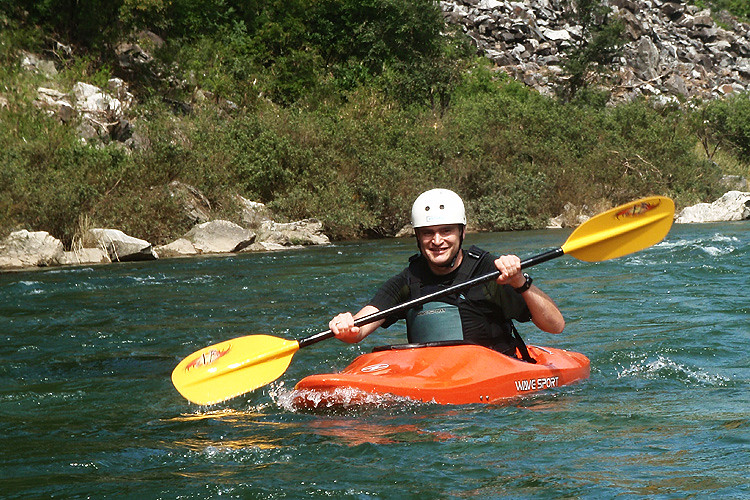 The hot springs or oncheon (온천) at Osaek are a delight to visit. Not only do you get to enjoy therapeutic alkaline hot springs, you can also immerse yourself in cooler (30°C) carbonated hot spring waters that are rich in iron and calcium. The sparkling water also promises to do wonders for your skin.

Make it happen: The spa is managed by Osaek Greenyard Hotel, but you can pay for hot springs-only admission (KRW 11,000 for springs only, KRW 17,000 including sauna/jjimjilbang). The springs are open from 6am-10pm (last admission 9pm).

If you haven’t heard about it before, Guardian: The Lonely and Great God (known also as Goblin) is a Korean drama that was highly raved for its cinematography, with scenes filmed across Korea and even Quebec City in Canada. One of its most iconic scenes was shot at Jumunjin Breakwater, just north of Gangneung city.

This is a really pretty spot worth visiting along Gangwon-do’s coastline. You can sometimes find rentals for a buckwheat flower bouquet and scarf to reenact the original Goblin scene; otherwise, just pose away.

What to eat in Gangwon-do

Unlike other more arable regions of Korea, Gangwon-do’s combination of crag and coast has led to a distinctive regional cuisine.

Everything You Need to Know About Traveling to North Korea

Where to stay in Gangwon-do

Apart from ski resorts, the best places to stay in Gangwon-do are by the seaside. There are plenty of hotels and guesthouses along the beautiful Sea of Japan (East Sea), but here are my picks.

Lotte Resort Sokcho ($$): If you want to pamper yourself at this 5-star resort after a grueling hike in Seoraksan, get an ocean view room here. Check reviews and availability.

Sun Cruise Resort, Donghae ($$): Ever seen a cruise ship perched atop a cliff? This hotel is famous for its quirky exterior, but the rooms are generously sized and boast sunrise views. Check reviews and compare prices.

Thanks to infrastructural developments brought about by the PyeongChang 2018 Winter Olympics, you can now travel from Seoul to Gangwon-do in less than an hour via the KTX Gangneung high-speed rail line. If you purchase your Korail Pass online, you can also reserve seats up to 30 days in advance.

Getting around Gangwon-do: South Korea’s cities and towns are serviced by plenty of intercity buses. You can use the BusTago website or app to search all possible bus routes. Online ticket booking is also available for routes from a terminus.

Things to do in Kangwon-do, North Korea

The progress of 2018’s inter-Korean summits has led to speculation that tourism between North and South Korea might be reestablished. Gangwon Province is likely to be the first area to open up, given how the Mount Kumgang Tourist Region was previously open to South Koreans; North Korea is also reportedly investing in tourism and both Koreas are now working on reestablishing rail links.

Mother Nature does not care for politics, and Kangwon-do’s beauty continues north of the border.

Wondering how you can travel to North Korea and what it’s like? Learn more in our North Korea travel guide.

For Koreans, Kumgangsan holds great historical significance. As one of the Five Mountains of Korea, it was frequently visited by artists and poets during the Joseon era and even bears different names describing its appearance in each season.

Many South Koreans lament not being able to visit Mount Kumgang ever since the shooting of a South Korean woman in 2008 led to the closure of the area to South Koreans, so I feel very lucky to have hiked this sacred mountain. 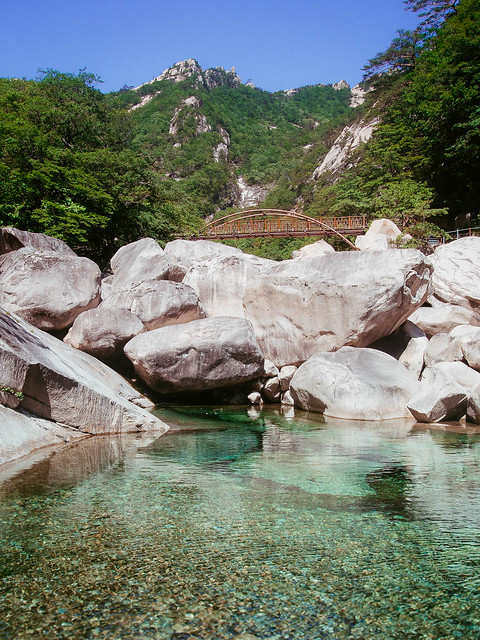 Stroll along the seaside at Wonsan

I visited Wonsan when it was still a rather sleepy town. Recently, however, the area is undergoing development as the Wonsan-Kalma tourist zone. If you manage to make your way here, indulge in the fresh seafood and seafood-seasoned dishes. Even the kimchi tastes different! 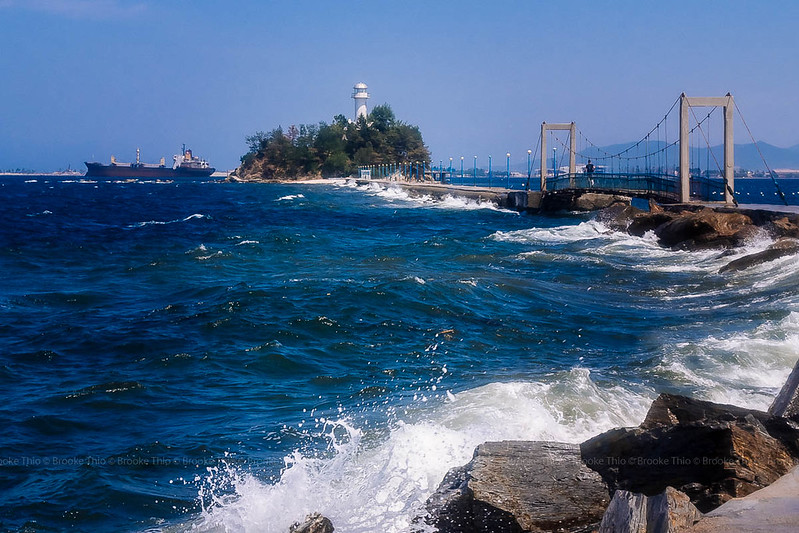 When choosing a Kangwon-do tour in North Korea, try and look for an itinerary that includes a night at Masikryong Ski Resort. This is the best North Korea-built luxury hotel that’s on par with upscale hotels in the rest of the world.

What else would you like to know or share about Gangwon-do? Let us know in the comments.