Trying to decide if flying with Scoot, the Singapore-based budget airline, is worth your money? I’ve flown multiple red-eye flights with Scoot, so here’s a full review and breakdown of what to expect.

When Scoot launched in 2012 with flights from Singapore to Sydney, I was brimming with youth and happy to give up some creature comforts to travel on a budget. In 2018, I again flew Scoot to Taipei and back on their newer Boeing 787 Dreamliner, this time for work.

While definitions vary, I personally consider any flight >8 hours as long haul, so my experiences with Scoot are borderline medium haul (SIN-TPE 6 hours; SIN-SYD 8 hours). They were all red-eye flights, however, which is to be expected since budget airlines don’t pay for prime landing slots.

I’m putting my conclusion up front before diving into the details: Scoot Airlines is seldom the cheapest unless you’re willing to go bare-bores, and that’s tough on Scoot long haul routes like Singapore to Berlin / Singapore to Athens.

Scoot vs other budget airlines 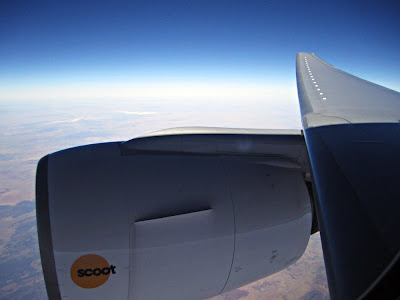 With three main budget carriers in the Asia-Pacific region (AirAsia, Jetstar, Scoot) there’s plenty of choice when it comes to prices and flight timings.

Scoot also tends to run regular flash sales via their Facebook page or e-newsletter, but they’ve led to far more complaints than happy customers. Often, the deals aren’t being applied properly during booking or they don’t apply to most dates. I simply browse flights on Skyscanner or Momondo instead.

Tip: You may see fares from OTAs (e.g. Via or CheapTickets) that are cheaper than booking direct. This may not really be cheaper if the OTA adds its own fees. Furthermore, if you face any changes or cancellations, getting the OTA to fix it can become a nightmare.

Seat Selection. I wouldn’t bother with this unless flying with companions, or on a long haul flight. Price varies by flight and choosing a standard seat costs $20 for Singapore-Berlin.

Scoot Stretch seats / Super seats. On my return flight from Taipei to Singapore, I was unexpectedly assigned a window seat on the exit row, which is typically designated as a Stretch seat. It was so comfortable being able to extend my legs that I quickly fell asleep! Price varies by flight.

Snooze Kit. $18 for a flannel blanket, eye mask, and inflatable neck pillow. Bring your own!

Wifi. From $7 for a pathetic 20MB. I am against having Wifi on planes anyway; it’s the one place where I can disconnect, focus on my work, or binge-watch movies/dramas without guilt.

To show you how much you actually save by flying Scoot on popular routes, here’s a comparison of nonstop flights on routes that are flown by parent company Singapore Airlines, as well as other carriers. Flights were found using Skyscanner.

If you can travel carry-on only, you can potentially save a lot by flying Scoot (or Jetstar, which is cheapest in this case). In fact, I’d happily put this sum to extra legroom seats like Scoot’s Super seats.

Of course, budget airlines love to spring that surprise “credit card processing fee” on travelers. Furthermore, Scoot and other budget airlines aren’t the best bargain for every destination. For a short-haul flight:

Finally, Scoot’s long haul flights from Singapore to Berlin and Athens are unique in that they are the first nonstop flights on these routes. Comparing it with other flights with a layover:

Here, Scoot costs more than full-service airlines, but it has the advantage of nonstop flights. Whether that’s worth paying extra is your call.

Important: This price comparison doesn’t take flight timings into consideration. Remember that if you leave or arrive at strange hours, you’re still paying for it with additional transport fares, a lost day/additional night’s accommodation, and so on.

Scoot’s web check-in is limited to Singapore and a few other destinations, while airport check-in counters only open 3 hours before a flight. Because of the limited number of check-in counters Scoot opens, expect a long queue even before the counters open.

Scoot’s on-time performance, however, is abysmal. As with any budget airline running frequent flights on a small fleet and tight turnaround, Scoot flights are often delayed due to technical issues. Yet, Scoot will not issue refunds for flight delays and cancellations. One friend’s flight was delayed by over 10 hours and he received no service recovery apart from a voucher to book another flight.

Scoot currently has two planes in its fleet: the Airbus A320 and Boeing 787 Dreamliner. It was formerly using the more comfy Boeing 777, but those have been retired. Standard seats in Scoot’s planes don’t come with a headrest, so it’s vital that you bring your own neck pillow and other items to help you get through a long haul flight.

Thanks to the tight 3-4-3 configuration, navigating the narrow aisles was essentially a matter of making sure no one else was actually walking along it as well. Luckily, the Super seats are up near the front of the plane and close to the lavatory.

The Super seats are much better value for money than the Stretch seats, but they’re only available on a few planes. At 168cm (5′6″), I had a roomy 15cm (6″) of free space between my knees and the seat in front. 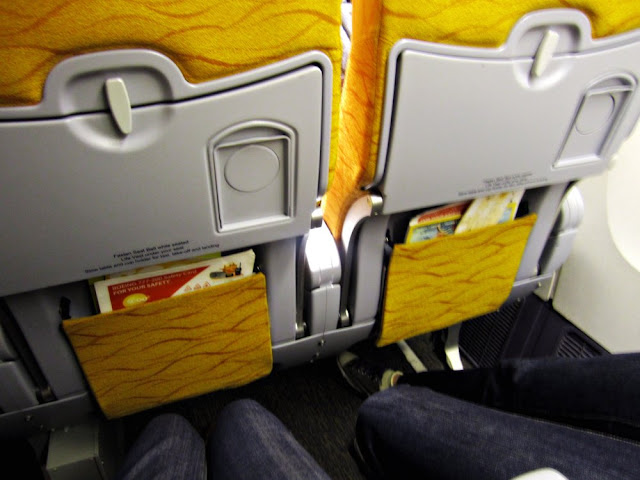 While the economy class seats on Scoot’s old Boeing 777 planes were quite cushy, those on their Boeing 787 Dreamliners are a literal PITA. Truth is, I have a pretty flat butt, and in less than an hour on the 787 my sit bones started to ache. If you need extra cushioning, consider bringing an inflatable seat cushion like the Klymit Cush.

Another issue with Scoot planes that hasn’t changed all these years: the reading light and call buttons are positioned on the armrests, making accidental presses of the buttons annoyingly frequent. Thankfully, Scoot’s in-flight service is brisk but not unfriendly. The flight attendants remained cheerful despite the fact that the poorly-positioned call button on the armrests led to numerous annoying false alarms.

Previously, I ordered the Beef Lasagna (left) and Soya Sauce Chicken Rice (right) Scoot meals. There are now far more meal options, but Scoot doesn’t hide the fact that they come straight from a freezer and microwave.

Do not, under any circumstances, order the Beef Lasagna, because you will end up getting this: layers of charred tomato, salt-drenched pasta, and random bits of meat glued together by cheese with the smell and texture of burnt plastic.

The Soya Sauce Chicken Rice was better: mine came with three quail eggs (which is a real treat compared to most microwave sets) and enough chicken to satisfy. If you manage to yank the plastic seal off the package without upending everything on the tiny tray table, that is.

While you can choose between mineral water or Pepsi, the “dessert” is standard: a packet of freeze-dried “fruit crisps”. I had a conspiracy theory about these, because they taste like artificially flavored Styrofoam bits meant to dry out your mouth so you’ll buy more drinks. But then I found out that the Scoot planes come with drinking water on tap, so you can fill up their water bottles for free…although flight attendants advise against this.

Scoot vs AirAsia and other budget airlines

For an 8-hour flight, flying Scoot was actually very bearable – in my opinion the extras are all reasonably priced, and the hours will fly by if you have a tablet/laptop to entertain you. As the only low-cost airline with direct flights to Sydney and the Gold Coast, the savings over standard airlines is significant.

Scoot’s prices may be tempting at times, but not always. If you do get a cheap flight on Scoot, make sure you bring plenty of entertainment and accessories to keep yourself comfortable throughout! What else would you like to know about flying with Scoot?