Chasing the Northern Lights (and Much More) in Tromsø, Gateway to the Arctic

A million stars were suspended in the silent black cosmos, like the thoughts that evaded my consciousness amid everyday life. Even in the numbing, shin-deep snow I couldn’t take my eyes off the constellations – I had to make sure that each time a star blinked off it’d reappear.

But then, a pale, grey smudge formed in the distance.

For two nights I’d wandered the outskirts of town for hours, eyes peeled for just a glimpse of the aurora borealis. My visit to Tromsø seemed cursed with stormy weather and low auroral activity, even as online forums raved about last week’s spectacular sightings. Damn.

With only two more nights left, I got anxious and booked a guided “Northern Lights Chase” tour. The next night, after driving two hours out of Tromsø in search of clear skies, I found myself somewhere in Skibotn. With what seemed like a raincloud threatening to break my lonely, desperate heart.

If you’ve been yearning to catch a glimpse of the Northern Lights, you’re not alone – this was my main goal for my very first solo trip abroad. This in-depth guide will convince you why Tromsø is your best bet for seeing the aurora and experiencing Norway’s wintertime beauty!

Why see the northern lights in Norway?

Thanks to media hype in the past few years about “peaking” aurora sightings, as well as some savvy marketing, northern lights trips have become especially popular in that other expensive country…(Iceland). Yet, Norway has got plenty going for it: hip cities, mild seasons, friendly people, and immense natural beauty that will have you high on adventure adrenaline for weeks.

Where to see the northern lights: Tromsø

According to NorwayLights, there 10 main locations in Norway where you can reliably see the northern lights. These are mostly located within the Arctic Circle, that magic zone near the North Pole where aurora visibility is the highest.

However, I chose to chase the northern lights in Tromsø mainly due to its reputation as the “Gateway to the Arctic”. This video will show you just why it’s so amazing!

Tromsø is one of the biggest cities within the Arctic Circle; it’s historically been the launching point for research expeditions and is home to the world’s northernmost university (University of Tromsø). This means it’s more accessible, with more affordable options for budget travelers, as well as plenty of nightlife and other attractions to keep you entertained. If you’re lucky, you may even see the lights from the city center!

Should you book a northern lights tour?

I wasn’t lucky, of course, which was why I’d sought help from local tour operator Arctic Explorers at the last minute. There are plenty of excellent tour companies offering northern lights tours in Tromsø, so solo travelers should have no problem booking upon arrival. If you’re traveling in a group, book in advance!

Tour types: I strongly suggest booking a small group tour to see the northern lights, rather than a bus tour. Although they’re more expensive, the small group tours often drive further and stay out longer – literally going the extra mile to help you witness this life-changing phenomenon. My group set off at 8pm and we watched the lights till 2-3am, only returning to Tromsø at 4am!

What to expect: Your Tromsø aurora tour operator should provide you with a snow suit, hat, gloves/mittens, and snow boots to keep you warm while watching the northern lights. My tour also involved a nice supper of the best freeze-dried meal I’ve ever had, sitting around a little fire.

Can you chase the northern lights in Tromsø without a tour?

Good news! It is entirely possible to rent a car and go self-driving in Tromsø to chase the northern lights – if you have the time and skills to do so.

First and foremost, you should be a skilled driver with experience driving in heavy snow. Fellow blogger Karen of Wanderlustingk has a comprehensive guide to driving in Iceland in winter, and the same rules apply to arctic Norway/Finland/Sweden even though the roads are frequently cleared by snowplows. If you’re not experienced enough, this is what happens:

You don’t have to worry about crossing the land borders as there are no checkpoints or controls, though you should notify your car rental company and always have your travel documents with you just in case.

Secondly, you’ll need to check the weather and aurora forecast. The Aurora Service website provides highly detailed, real-time information about solar activity and aurora strength, but you’ll also need to make sure you choose a location with clear skies – clouds will obscure even the strongest lights.

Finally, as with any road trip, you need to be well-equipped with warm clothing, emergency rations, and basic survival gear. If you choose to wait for the lights outdoors/outside your vehicle, you must move around constantly to stay warm.

What’s the best time to see the northern lights?

The best time to see the northern lights applies to all locations in the northern hemisphere: while aurora activity occurs from September to March, late November to January are best avoided as this is the height of winter, with lots of clouds and snowstorms. I’ve had friends who have seen the aurora even in the light-polluted city, and also friends who saw nothing even on 10-day trips.

“That’s how unpredictable and elusive it is,” quipped my guide Thomas. “We never trust the meteorologists. Sometimes on a cloudy night like this, just when you’re about to give up and go home, the most amazing shows appear.” Here’s where the advantage of a tour comes in: tour operators typically have a few teams heading out in different directions, and when one team finds the aurora, they’ll let the others know (much like on safari!)

Tromsø is also popular as northern lights destination because of its mild weather: I was there in March, and it was roughly -10°C outside on a calm night. Of course, you’ll still need to have ample clothing to stay warm for hours. (Tip: wear quality base layers and windproof shells, and bring heat packs!)

What to do when you actually see the northern lights

Let’s jump back into where I was: somewhere in Skibotn, shivering and squinting hopefully at the sky.

As I stood observing that little smudge, it didn’t seem quite like a cloud. It seemed…ever-so-slightly green in color. Even though I felt like a fool, hope overcame uncertainty and I nudged Thomas.

Let yourself be mesmerized. The aurora starts out slow, soft. You may not even notice it’s there until a swath of emerald has unfurled across the sky. Unknowingly you’ll step forward, wanting to get closer. Then the striations start their slow, ethereal dance and no matter how you try to find words for this magnificence, the only word that will escape your lips is wow.

You will ignore the cold biting mercilessly at your fingers and toes. You will strain your neck following the path of the lights overhead, as one streak fades and another takes over – another size, another pattern, another movement. It may seem silly, but I stood there and listened, even though the aurora made no sound.

There’s plenty of time to take photos, so make sure you fully immerse yourself in the experience. Long exposures and accelerated frame rates paint a picture of shimmering, dancing green rivers in the sky, but the reality is that those come recording a decent show of at least an hour!

Even on nights where the lights “buzz” and “dance”, it’s like the world moves in slow motion – strong aurora displays can last for hours or even all night. For me, it was only about four hours later that the lights finally, slowly faded away, leaving the night sky to the stars once again.

Believe me, photos don’t tell you how indescribably beautiful it is to witness the Northern Lights in person, because you don’t just see it. You feel it resonating within your soul.

Other things to do in Tromsø

While seeing the northern lights in Tromsø (or anywhere) is a bucket-list dream for many travelers, it’s also heavily dependent on luck and if you travel somewhere solely for this, you’re setting yourself up for disappointment. That’s why Tromsø is such a great choice for a northern lights trip: there’s lots to see and do here! 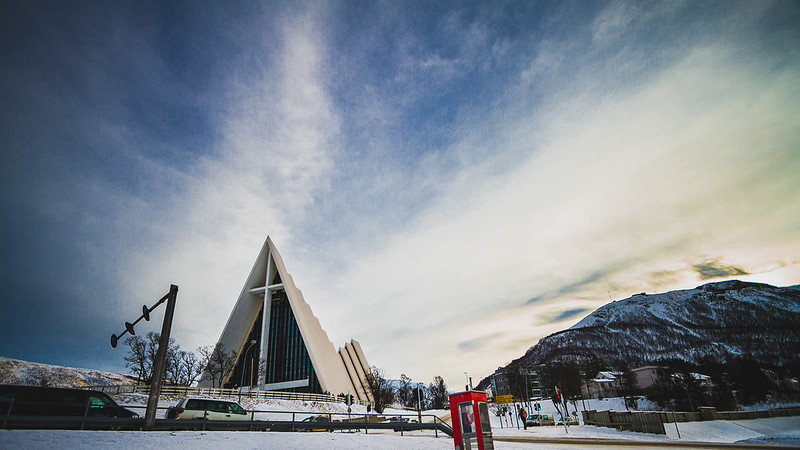 Powered by GetYourGuide. Become a partner.

Where to Stay in Tromsø

Despite the Airbnb accommodation boom, demand for places to stay in Tromsø remains high in both summer (thanks to the Midnight Sun Maration) and winter months. Do check far in advance to secure your ideal accommodation.

Find affordable private rooms as a solo traveler, or entire apartments to share as a group.

Stay in cabins or park your mobile homes at this campground just across Tromsø Bridge in Tromsdalen; get panoramic views of Tromsøya island!

How to get to Tromsø

Check out these guides by Kristine, The Petite Wanderess:

Tromsø is served by direct flights from Oslo, Bergen, and several other Norwegian cities, as well as London and Stockholm. Check your flight options!

Plan for delays flying in and out during winter – my flight out was delayed by a snowstorm and I experienced my first plane de-icing (fun fact: according to the pilot, it cost $10,000!)

Would you see the Northern Lights in Tromsø or elsewhere in Norway? What else would you like to know?

This Is How Hakodate Will Steal Your Heart

Alternative Singapore: 13+ Unique Things to Do for the Seasoned Visitor