Behind the Scenes of Mongolia’s Golden Eagle Festival

We spot the cloud of dust rolling towards us and we pull over.

The man slows, stops. Spit flows from his horse’s mouth. Rider and steed have been traveling for hours in the hot sun. They don’t go much faster than a steady trot because perched on the man’s arm, hooded and calm, is a large and majestic-looking eagle.

“Hello,” he replies, squinting down at us in the sunlight. This is my first encounter with a Burkitshi – a Kazakh eagle hunter. 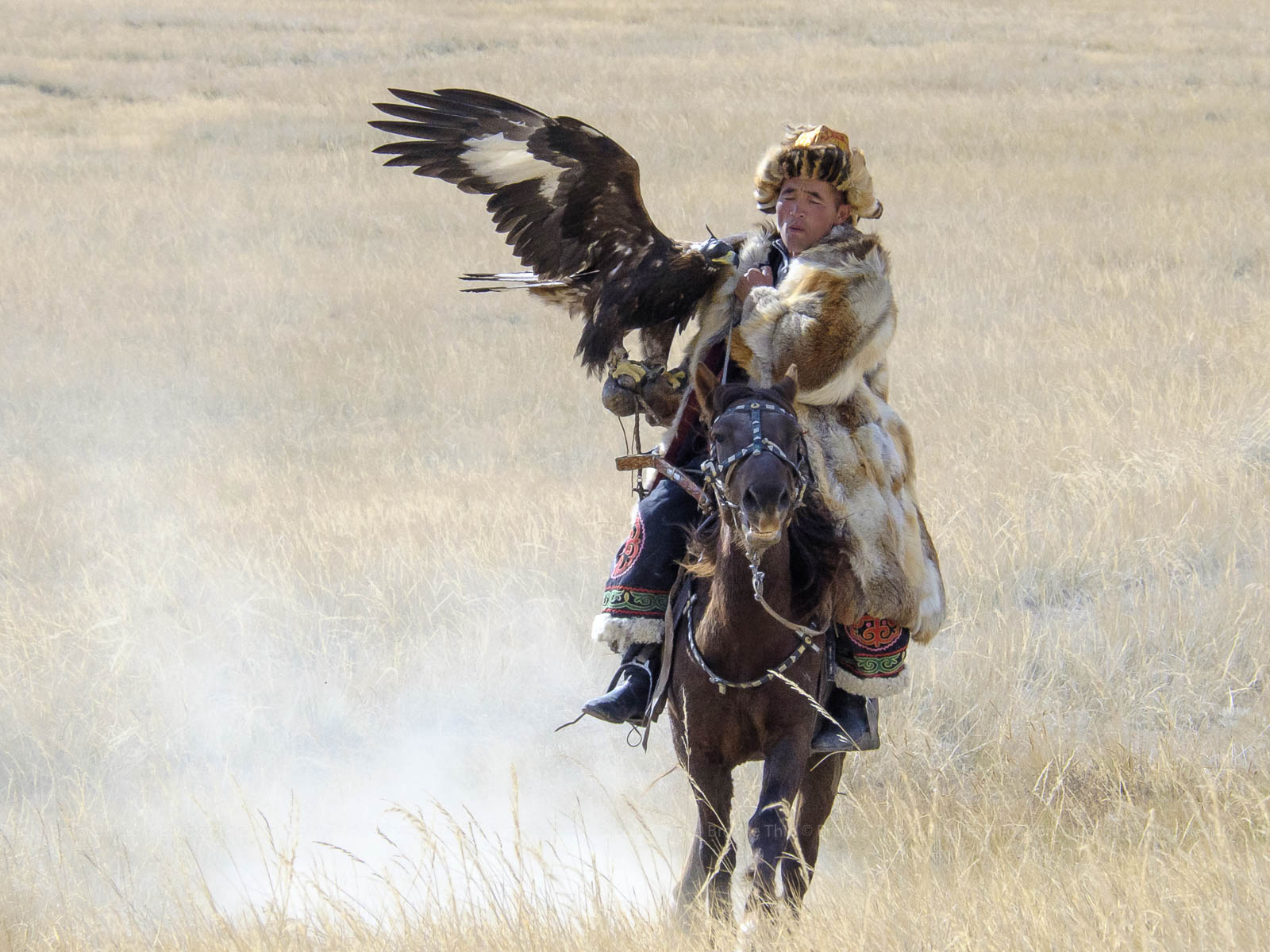 We proffer a bottle of water, which he swigs from, and biscuits, which he tucks into his coat for later. He is one of many on their way to the town of Ölgii for tomorrow’s Golden Eagle Festival – the annual gathering of eagle hunters for which some must ride for days on horseback to attend.

Eagle hunting is a Kazakh tradition and the eagle hunters of Mongolia are ethnic Kazakhs, not Mongols. Most Kazakhs in Mongolia live in the western provinces of the country, where they settled in the 19th century during the expansion of the Russian Empire. Here in Bayan-Ölgii province, roving across endless steppe in our robust Russian-made van, we have to rely on our driver to translate between the Kazakh and Mongolian languages, which our guide Boogie then translates into English for us. Luckily, they know just what questions to ask.

The second hunter we meet on the road is older, and we learn that he’s trained 32 eagles in his 56 years. “I’m particularly proud of this one,” he beams. “Her name is White Horse, because she has a rare white patch on her shoulder.” Tenderly, he brushes her feathers aside to show us what he means. “You won’t find another eagle like her.”

We wish him luck, as we did the first, then drive on to meet the local family who will be hosting us for the night. 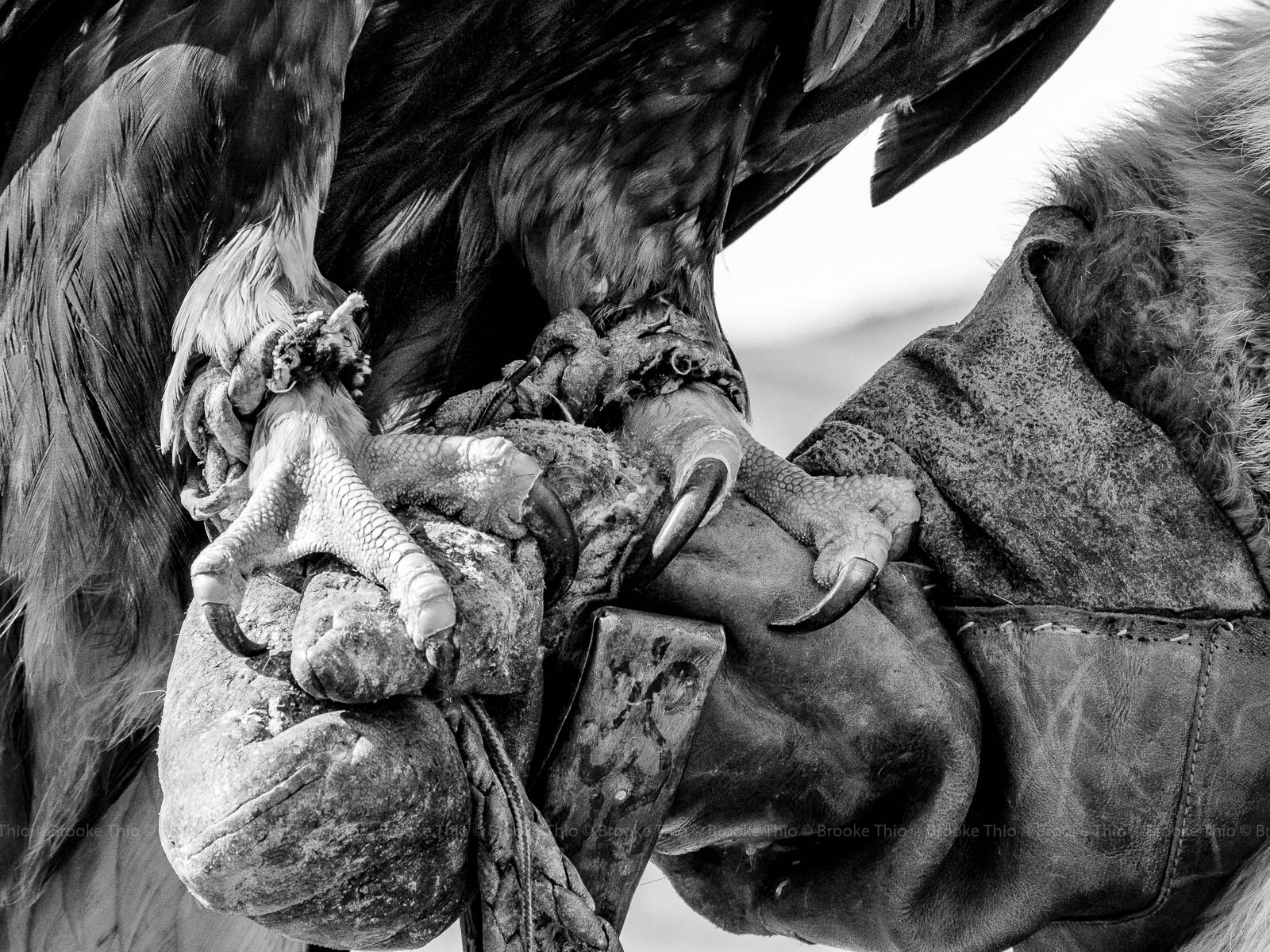 The Kazakhs in Mongolia

Our host family is located roughly an hour from town, the latter half of which is spent bouncing across a patch of ground studded with hummocks; I cling to my seat for dear life as the van shudders and squeaks. Finally, we disembark next to a pair of gers and I heave a sigh of relief.

Some back-and-forth between Boogie, our driver, and the young men welcoming us reveals that the head of the household, a veteran eagle hunter, has gone to Ulaanbaatar on business and that his son will be taking care of us. We’re led to the second ger, which has been set up just for us, and unpack. As we settle in I learn that our host, with a face hewn by the elements, is but 20 years old and already father to a plump baby girl. In the countryside people marry young.

“The Kazakh consider girls to be a treasure,” says Boogie as we play with the infant while having tea with the couple, who speak neither Mongolian nor English. “Women run the household: cooking, milking the cows and horses, making their famous embroidery which includes all the wall hangings and carpets, and sewing clothes for the family.” I’m impressed, but also relieved that I won’t ever have to live like this – especially after I try my hand at milking a cow and nearly spill the entire bucket.

As the shy young wife helps her husband dress for his trip, we’re informed that the daughter of the family is also training to become an eagle huntress. Perhaps thanks to the attention that documentary The Eagle Huntress has bestowed on the burkitshi community, families are now letting girls take up the male-dominated tradition. Glancing at the baby I wonder if she’ll grow to follow in the footsteps of her mother, or those of her father and aunt.

After our young hunter has set off to town, we decide to visit the “neighbors”. It’s a strange experience finding a speck of human life in the distance and driving 10 minutes just to say hi, while city-dwellers like myself will hardly speak to the next-door neighbor for fear of breaking the little personal bubbles we have. But what is scarce is precious, and here the value of hospitality becomes as clear as the white gers against endless grass and sky.

Mongolia’s nomads typically move 4 times a year, rotating their pastures, but this larger family is settled in a concrete house that will stay warm until the harshest part of winter. We’re heartily welcomed by the head of the household, a remarkable man; retired but still full of vigor, he speaks directly to Boogii in Mongolian and even addresses us with a few words of English.

His family is also getting ready for the festival, and I silently observe the matriarch putting the finishing touches on a coat, impassive to the flurry of activity caused by our visit – even as the old man croons to a dombra. This is the song I sang to my wife when I was courting her, he says. Afterward, they truss up an eagle to be carried to town by van.

At dinnertime, back in our hosts’ home, we dig into a platter of Beshbarmak (meat with noodles and vegetables) together with the young hunter’s wife and younger brother before an early night. The next morning, however, I’m surprised to find our host having breakfast with us.

“His eagle got sick last night, so he’s returned for the second junior one. She probably won’t do well in the competition, but it’ll be good exposure. We’ll give them a lift in the van,” explains Boogii.

The junior eagle has been, well, quite a headache for the young hunter and all of us. It seems she was caught as a hatchling and is now proving difficult to train. She still can’t perch properly, but worse still, she’s been shrieking through the night. I’ve nicknamed her the Car Alarm. Nevertheless, she’s bundled up and cradled in our poor, stressed young hunter’s arms. Squawking. All the way.

There are a record 112 competitors this year, including a special delegation from Kazakhstan as well as six huntresses. After the opening parade, the festival officially begins with a judging of the eagles’ and hunters’ turnout in their hunting regalia, followed by a test of how well-trained the eagles are.

Each bird is released from the top of a rocky hill behind the competition ring, where its owner calls and waits; however several of the eagles soar off into the distance instead of returning to their owners and their lures. I’m starting to feel this contest is too risky, but Boogii chuckles and reassures me that the eagles never escape to the wilderness – not until they’re lovingly released by the hunters after 7-10 years together.

“They don’t fly very far, not in Mongolian terms, and they’ll return to the hunters afterwards.”

Over the two days the hunters also compete in Tenge Ily (picking up coins from the ground while galloping on horseback) and Kukhbar (a horseback tug-of-war). By the afternoon of the second day everyone is inebriated to some degree and some of the hunters relinquish their hold on the sheepskin in mere seconds, while others fight for minutes – one pair even tussle to the point where their horses crash past the ring and into the crowd of spectators.

Beyond the competition there are side events like camel races and archery games, and of course a flea market and food tents to cater to visitors. Both days of the festival are marked by a bone-chilling wind and thick gobs of cloud that cling to the hills, letting the good light through for only a few minutes at a time, so I sustain myself with doses of coffee and kebabs from the flea market. True relief comes only at lunchtime when I can scuttle into one of the many dining gers, peel off my jacket and gloves, inhale the warm greasy air, and get my hands on some hot tea, and kushuur and buuz (fried and steamed dumplings). 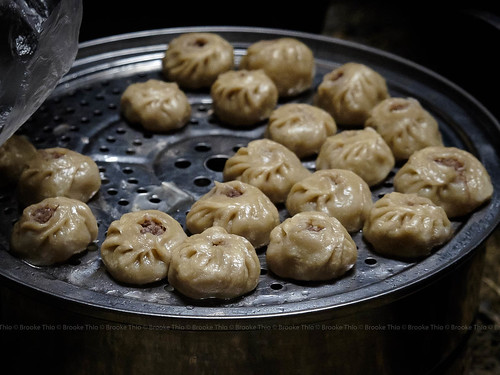 I navigate the flea market with Boogie in tow just so she can help me eye up the bargains. The Golden Eagle Festival is the best event to shop for fur goods, she explains, as the eagle hunters are the main source for fox, sable, and even wolf pelts. Fur hats here average $20-$30, with the best ones going for $45 if you haggle some. Embroidered rugs, felt slippers, and other trinkets are also laid out, albeit too haphazardly to catch my eye, as the wind keeps throwing its dusty tantrums.

As the light of my second day here begins to fade, the scores for this year’s Golden Eagle Festival are finally tallied and winners announced. Competition aside, the camaraderie among the hunters is genuine: they slap each other on the back and yell out hearty congratulations, prancing about on their horses amid the sea of spectators.

The Golden Eagle Festival is a reunion and celebration for the Burkitshi, many of whom may see each other only once a year. I can’t understand a word they’re saying, but if I were to guess: they’re probably planning where to go for drinks tonight.