Spirited Away, for One Afternoon in Jiufen

The sun was blinding. I leaned out over the wooden fence to plot the trio of switchbacks the bus had slowly but surely navigated, up past the chenghuangmiao (City God Temple) to this roadside bus stop. In the distance, where sea met sky, the horizon glowed white.

I tried my luck grabbing a few panorama shots with my phone, but I could barely see anything on the screen and the heat sapped my vigor faster than I’d like to admit. Scampering out of the sun, I followed the crowd into what seemed like a tunnel next to a 7-Eleven.

Just like that, I was officially in Jiufen Old Street.

The town of Jiufen dates back to the Qing dynasty, and the name means “nine portions”, representing the nine families that settled in this once-isolated mountain village and often had to have supplies sent to them. That isolation was lost in the 1890s, when the Japanese colonized Taiwan and an abundance of gold was discovered in the hills extending to Jinguashi.

Prospectors and other entrepreneurs jostled to build their homes on the hills of the boomtown, resulting in modern-day Jiufen’s steep, winding lanes and alleys – some of which eventually led me to the best views of Taiwan’s northern coastline. First of all, though, I had to survive the barrage of street food stalls, souvenir huts, and sweltering summer heat of Jiufen Old Street (九份老街) – the name given to the main snarl of pedestrian tourist laneways in Jiufen.

Things to do in Jiufen Old Street

Taro balls (and also sweet potato and mung bean balls) are made from a mash of taro and potato flour. They’re then cooked to a soft chewy consistency and served in hot/cold syrup, or as part of other desserts like tofu/grass jelly pudding.

In Jiufen Old Street, the most famous shop for taro balls is Lai Ah Po Yu Yuan (賴阿婆芋圓), literally “Grandma Lai’s Taro Balls”, at No.143 Jishan Street. However, and plenty of other places also offer taro balls if you’re not keen on queuing.

A-Mei Tea House (as well as other buildings and the lanes of Jiufen Old Street) is often claimed to be a source of inspiration for the scenes in Hayao Miyazaki’s 2001 animated film Spirited Away. However, Miyazaki himself has denied this in an interview (article in Chinese) – though the resemblance is unsurprising given that Taiwanese culture was once so heavily influenced by Japan.

Personally, I didn’t sense any connection between Jiufen and the film, but I did feel like I’d been “spirited away” to a whole other world. Jiufen Old Street’s architecture takes after the Edo period, unlike the western-style colonial buildings of the Meiji-Taishō-early Shōwa periods (which are still seen throughout Taiwan).

The assemblies of natural wood strike a gorgeous contrast against the emerald slopes and blue horizon.

While you’re in Jiufen, you might notice people the size of ants crawling up a mountain path, heading towards a barely discernible pavilion at the very top. That’s Keelung Mountain, and yes, you can hike it – just not in summer. 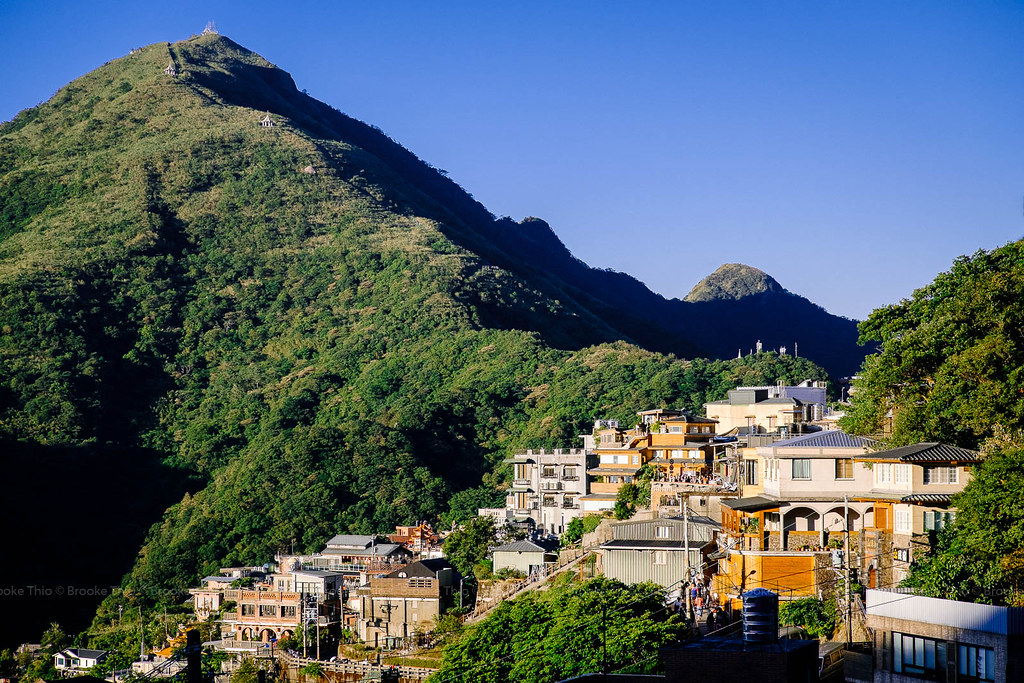 I felt a touch of heatstroke just by looking at the few hikers I spotted that day, and the trail to the peak involves thousands of steps. Make sure you’re appropriately dressed and hydrated, no matter what time of the year you visit Jiufen and/or attempt this hike.

Get lost in the hillside lanes

In my quest to escape the crowd, I strayed west into the hills. Amid blocky concrete houses basking in the afternoon light, I felt the tension evaporating as I looked back at the now tiny and seemingly faraway Jiufen Old Street.

It’s not as far as it appears, though – I took a mere 15-minute walk, and enjoyed little moments like this cute discovery:

Wilting fast in Jiufen’s summer heat, I was for once more than happy to quench my thirst at a modern-looking, air-conditioned café instead of at a traditional shop. Sharp-eyed James picked a place that was facing Keelung Harbor, and we were ushered to the top floor where a balcony offered the perfect sunset vantage point.

Enduring the cloudless, merciless summer day finally brought its reward: the sun retreated behind the mountains, casting its last rays onto an extravagant blue twilight. This sunset in Jiufen was the highlight of my day trip – I didn’t expect the view to be so mesmerizing.

Tip: Get to a café, teahouse, or other viewing spot reasonably early and chill out for a bit. Food and drinks aren’t too expensive for a tourist spot, and you won’t end up constantly dodging selfie-wielders hogging public spots like this:

How to Plan for a Jiufen Day Trip

Unless you’re hiking Keelung Mountain, Jiufen really doesn’t require more than half a day to explore – I spent around five hours here, arriving at 3pm and leaving around 8pm. Here are some key tips to get the most out of a Jiufen day trip:

Getting from Taipei to Jiufen

You have a few main options for traveling from Taipei to Jiufen.

There’s lots to discover in Taipei too – check out our Taipei public transport guide.

Have you visited Jiufen? If not, would you go and what do you think you’d enjoy most about it?