My phone alarm rings at 5.30am. Instantly I am awake, drawn from soft sheets by the opportunity to wander around all by myself. I quickly wash up and change; twenty minutes later I am sneaking out onto the cobblestone street running alongside the hotel. I don’t even have to pay the 100-Yuan fee to get to the waterfront; the gates are open and unmanned.

Last night, upon arrival at Xitang water town, our tour guide had shepherded us onto a bumboat for a cruise on the canals. While we chugged through the gaudy neon lights of karaoke bars and gift shops and the guide went into her spiel, I was spellbound by a picture of a Chinese ink painting in my guidebook. It depicted the water town on a quiet morning. Lone fisherman on the main thoroughfare. Waiting, with his cormorants.

I wanted to live that painting. 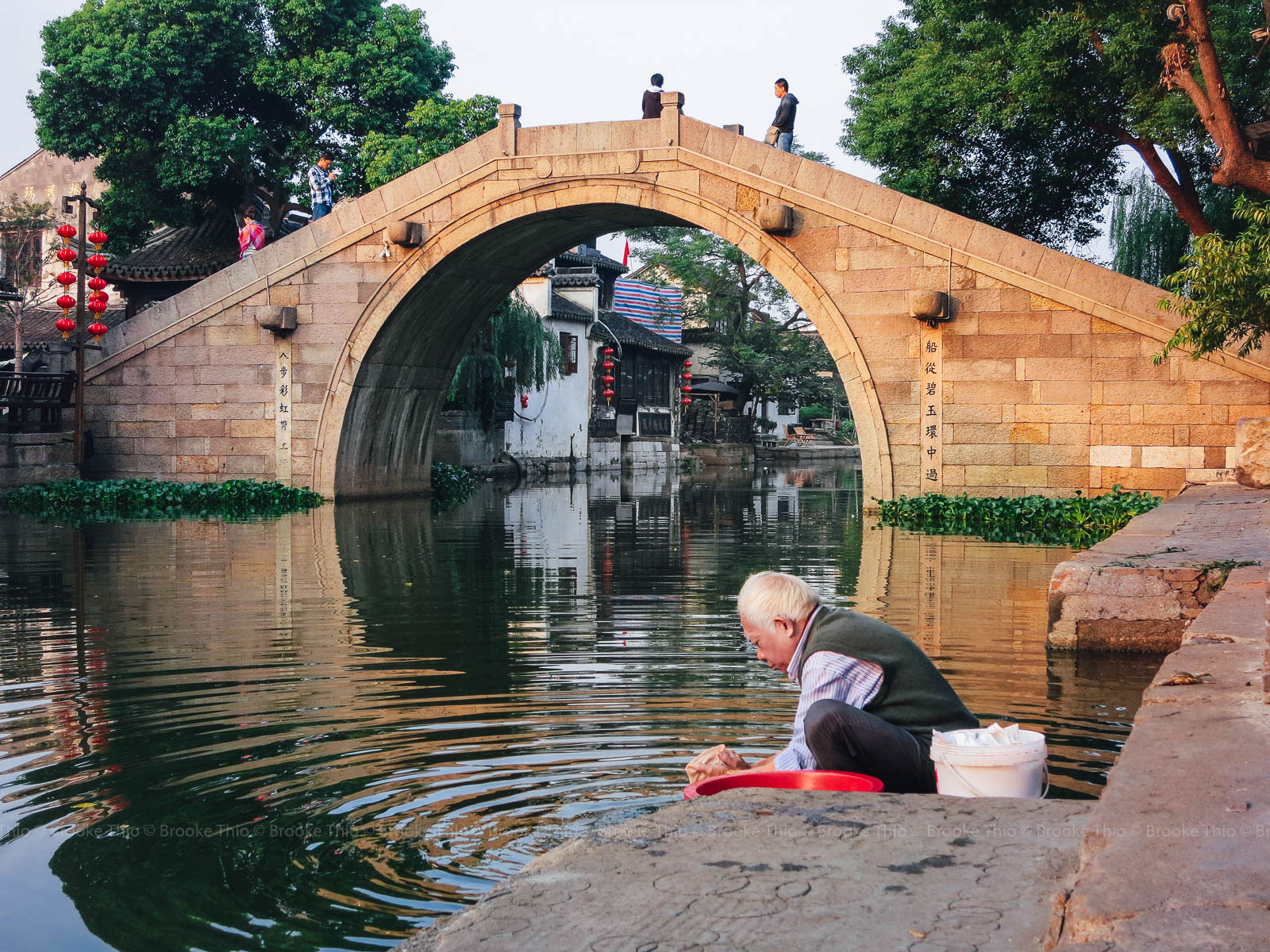 Xitang’s (西塘) origin dates back to the Warring States period around 476 BCE, making it one of the oldest of the dozen-odd ancient water towns in China’s Jiangnan region. However, the buildings that stand here today belong to the later Ming (1368-1644) and Qing (1644-1911) dynasties. Built around the intersection of nine rivers, the waterways form junctions that can only be crossed by bridges – 104 of them, to be exact – and on one of these I perch my camera as the sun lazily paints the water and the stone houses and the sky.

All along the covered corridor by the banks I spy locals beginning their day, relishing the hour or two where their home is all their own before the tourists descend upon them. I know this because when I stop at a dingy breakfast shop the owner is none too pleased to already have his first customer. I place my order, a doujiang youtiao (豆漿油條; soy milk and dough fritters), and observe him at work.

What’s the matter? Never seen someone frying youtiao before?”

“Of course I’ve seen it before. But not like this.”

I think the way I eat satisfies him, at least. Peeling the traitorous couple apart, coating my lips with grease from the crunchy ends, then dunking the strips in steaming milk so they’re sweet and slightly soggy. Divine.

By the time I’m done with my breakfasts – the one in the village and the one back at the hotel – the town is yawning to life. While tourists swarm the main streets and the bridges, locals appear and disappear through their secret passageways: the narrow house-lanes that are a unique feature of Xitang. These lanes thread along the sides of houses and the most famous is perhaps shipinong (Shipi Lane), which at its narrowest point is only 80cm wide, allowing only one person to squeeze through. My imagination goes wild for a moment: how many crimes – and even crimes of passion – have taken place here?

The houses themselves conceal riches, and not those of antiquity alone. Along rows of equally narrow, equally drab facades, my tour group is led over a two-foot threshold into West Garden. After passing three consecutive courtyards we enter an amazing landscaped garden where, over a pond, a pavilion hangs over on a rough outcrop. This architectural showcase was once the home of a wealthy Ming Dynasty family.

Upstairs, in one of the bedrooms filled with replica antiques, an overhead bridge connects to another wing of the estate across one of the aforementioned house-lanes. We cross, albeit warily, and eventually leave via a back garden in the other wing. According to our guide, the men and women of rich households had separate gardens and entrances: front for men, back for women.

Food, and Other Treasures

Traditional snacks and sweets are sold on nearly every street in Xitang water town, with most vendors making their wares on the spot. As I pass by I cannot help but purchase a few packs of colorful and chewy qianshigao (芡實糕; gorgon fruit cake) as souvenirs, as well as dragon beard candy for myself: little bite-sized clusters of chopped roasted peanuts wrapped in melt-in-the-mouth filaments of sugar. There are also plenty of shops selling street food like black glutinous rice, steamed buns, congee, and noodles, together with a wide selection of hot and iced tea drinks – this is China, after all.

Speaking of tea: amid the many tourist-trap shops selling indiscriminate tea blends and teaware are a few gems. At Baliuzi I gawk at an exquisite (and very reasonably priced) glazed celadon tea set, and then at another shop called Yi Peng Ge, I cave in after Peng, the soft-spoken proprietor, has spent a good hour or so showing me that his teapots are genuinely handmade. He even highlights the difference between his father’s finer wares and his own, less intricate, pieces. An enameled Yixing clay pot it is.

“I’ll use this for my Oolongs.”

Despite the tourist influx, I learn that life as a local in Xitang is still good. “The younger generation hasn’t left because there are opportunities here – to make a living, to meet foreigners,” he deliberates over a steaming round of tea. Much as I cannot fathom living in a small town, one could be very comfortable here, especially with the aid of technology.

The Batak Museum: Rumors and Realities of A Formidable People

Ironically, for all the touches of modern commercialism I’ve been avoiding – from the pubs to the Airbnb listings – Peng’s shop isn’t listed on Google Maps, and his website’s domain has expired. Will I still be able to find his shop if I return to Xitang one day, I wonder?

Just as I did for the sunrise, I’ll have to make more of an effort.

Xitang water town is an easy day trip from Shanghai or Hangzhou. Although trains run from both cities to Jiashan, the nearest town, I recommend taking a direct bus instead of having to transfer from rail to local bus at Jiashan.

There are also buses from Suzhou and Ningbo. From where you alight at Xitang, you’ll be able to get timings and prices for return tickets.

Where to Stay in Xitang

While you can explore Xitang in a day, I highly recommend staying a night to experience the beauty of the ancient water town at night.

Xitang accommodation ranges from budget to mid-end. I stayed at the very comfortable Yanyu Jiangnan Hotel, which has waterfront rooms right by the river. However, if you’re visiting Xitang on a budget, there are several listings on Airbnb. (Haven’t tried Airbnb yet? Get $40 credit for your first booking)