Have you ever heard of Belitung?

I confess: I’d never heard of Belitung island even though it was less than an hour’s flight away from where I lived and over six times bigger. Not until Asian Journeys sent me on a trip hosted by Visit Indonesia. Now, I’ll say this: you should visit Belitung. It’s marvelously bucolic and beautiful, as you’ll see in this guide.

Things to do in Belitung in 48 hours

Where to stay in Belitung

Fun fact: Belitung island is what gave metals and mining company BHP Billiton its name. The Indonesian island, controlled by the British from 1812 and the Dutch from 1824, was a source of tin and iron ore as well as other industrial and agricultural products.

Sounds dreary, doesn’t it? Here’s what it looks like: 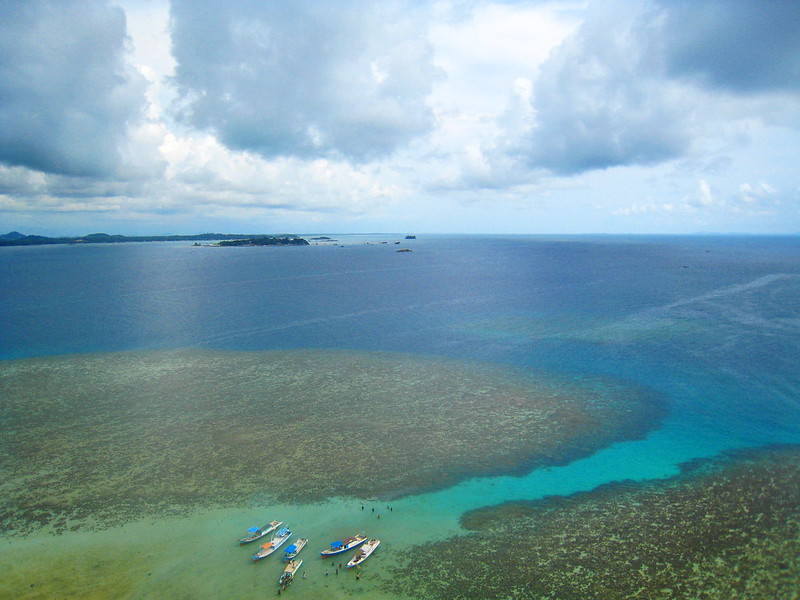 That’s just one example of the beautiful waters around Belitung, of course. Culture-wise, Belitung’s long history as a tin mining source drew many immigrants to the island. In addition to ethnic Malays, you’ll also find a huge population of Hakka Chinese from Guangdong province (China), Bugis from South Sulawesi, and even a Balinese village in Belitung! However, much of the population lives in Tanjung Pandan: Belitung’s main town and where its airport is located.

Now, it is completely possible to visit Belitung and cover its best attractions in a 2-day itinerary – I spent a weekend in Belitung and thoroughly enjoyed myself. However, as a slow traveler, I recommend spending 3-4 days here if you can.

Things to do in Belitung in 48 hours

Belitung is surrounded by dozens of smaller islands along its shores, of which a handful can be easily visited by hiring a boat for the day. You should also request for snorkeling gear and be prepared to get wet, as the waters around Belitung are amazingly calm, clear, and shallow.

Most boats for island hopping will depart from Tanjung Kelayang beach, and it’s best to start early in the day if you want to avoid the crowds during peak tourist season. Word of warning: if you’re taking photos and it seems like it might be a rough day at sea, try to sit as far astern as possible and hold on tight. My captain had no qualms riding the waves, so we all had quite the thrill and got thoroughly soaked!

The one island most tourists will visit is Lengkuas Island (Pulau Lengkuas), marked by a 136-year-old lighthouse that was built in 1882 by the Dutch Colony government – and is still functioning today. It’s worth climbing the 12 storeys to the top: you’ll be rewarded with a view of tantalizing turquoise waters – and you can certainly go for a dip, by snorkeling with the fishes at a coral-coated shipwreck near Lengkuas Island.

For marine life enthusiasts, Kepayang Island should definitely go on your list: it’s home to a dive and conservation center where you can participate in coral replanting and release a baby turtle into the sea with a small donation. Other smaller islands to check out include Pasir Island (a sandbar only accessible at low tide) and Burung Island (rock formations inhabited by various birds).

Belitung may have many beaches, but Tanjung Tinggi beach is perhaps the best and most popular. Besides being a filming scene for the award-winning Indonesian movie Laskar Pelangi (“The Rainbow Troops” – originally a novel), it’s also where you can catch a most dramatic ocean sunset from a perfectly placed rocky perch.

Hike and hunt for tarsiers

If you’re a wildlife enthusiast, you’ll be delighted to hear that Belitung is home to the tarsiers, one of the smallest primates in the world found only in Southeast Asia. Specifically, the Belitung Island Tarsier (an endangered subspecies) is roughly the size of your fist. The fragmented populations of Belitung Island tarsiers are being protected and cared for – and you have a chance of spotting them in their natural habitat at Peramun Hill, which also functions as a nature reserve.

Tarsiers are nocturnal creatures, so you’ll have to visit Peramun Hill at or after sundown. Friendly rangers will lead you along dark paths in an attempt to spot the tarsiers. According to them, are only 8 pairs of tarsiers here: pairs, because tarsiers apparently mate for life. Unfortunately, my group wasn’t able to spot any of them even though we even went digging in the ground for the tarsiers’ favorite food – longhorn beetles – and I nearly went deaf from the beetles’ screaming!

If you want guaranteed sightings, make your way to Batu Mentas Eco Lodge and Tarsius Sanctuary. The lodge was founded by a local environmental NGO together with Indonesian conservation institutions. More information and rates here.

Get a taste of local Belitung coffee

One of Belitung’s local trademarks is its rich, intense brewed coffee. Although Belitung doesn’t grow its own coffee, the locals love drinking it and usually import beans from other parts of Indonesia. While exploring Belitung, keep a nose out for that tantalizing earthy aroma that’ll tell you fresh coffee is close by!

Belitung’s coffee is as much a performance art as it is a drink to be savored: brewed in humongous coffee kettles, the coffee is expertly poured into tiny piccolo-sized glasses. As I discovered, this serving size is for the drinker’s own safety: any larger and you risk a caffeine overdose.

The most famous local coffee chain in Belitung is Kopi Kong Djie, which became so popular it now even has an outlet in Jakarta. No matter where you try it, though, I strongly recommend ordering it black or requesting for less milk as the condensed milk used in Belitung coffee is frightfully sweet.

Ignite your senses at a local market

If Belitung’s coffee still isn’t enough to wake you up, a visit to the Pasar Tradisional surely will. I love strolling through local markets and feeling my senses go on overdrive from all the activity; this open-air market is no exception.

This is local Belitung life at its busiest, as residents shop for fresh produce, dried goods, and groceries. If you’re a spice addict, don’t miss out on getting some sambal (chili paste)

Call me a glutton, but the first thing I did upon arrival in Belitung was eat. Belitung’s local cuisine is pretty similar to mainstream Indonesian cuisine – lots of sweet and spicy – but with much more seafood. At Kampong Belitong, one of the fancier establishments in town, you can enjoy a traditional lunch platter, which comes with various dishes and a pot of rice for sharing. Another scenic dining spot is Bukit Berahu Resto, part of Bukit Berahu Cottage where you can stay.

The best food I had in Belitung, however, was dinner at an inconspicuous, dimly lit diner called Rumah Makan Nelayan Seafood. Our group dug into crispy calamari, spicy stir-fried kangkong (water spinach), deep-fried fish and more – all while we took turns singing 80s tunes on the karaoke floor. For supper, we even stopped at a roadside stall – set up right in front of a local family’s house – for durians from their garden.

Note: None of the eateries above are air-conditioned. Most local diners in Belitung appear rudimentary, but serve up tasty local food. If you want to enjoy Belitung’s laid-back way of life, skip the hotel restaurants and head for the streets.

Photograph the kaolin lakes (and fool your friends)

When flying in to Belitung, pick a window seat: you’ll spot dozens of brilliant little pools sprinkled about the island, all in varying shades of aqua.

The bad news: these are a not-quite-natural phenomenon – they’re actually old kaolin mines filled with rainwater.
The good news: you can still capture stunning photos and make like you’re at a glacial lake in winter!

The brilliant white of remaining kaolinite in the open mines forms the base of these “kaolin lakes”, which simply reflect the blue of the sky in order to attain that incredible color. The nearest one is only a 10-minute drive from Tanjung Pandan, so you can easily wander over on a sunny day with clear skies.

Where to stay in Belitung

Belitung accommodation is currently quite affordable. Most decent hotels are located in the main town of Tanjung Pandan.

Visiting a Turkish Bath in Istanbul: An Essential Guide

Fairfield by Marriott Belitung: Currently the newest and only international chain hotel in Belitung (opened March 2018). The current prices are an excellent bargain – even lower than BW Suite and Santika Premiere mentioned below.

No matter where you stay, note that mosquitoes will be a nuisance in the evenings, especially along any beachfront. Make sure you pack sunblock for daytime and mosquito repellent for nighttime!

All flights to Belitung arrive at Belitung Airport in Tanjung Pandan; its full name is H.A.S. Hanandjoeddin International Airport (TJQ). There are multiple flights daily from Jakarta, as well as nonstop flights from Singapore to Belitung 4x a week. Check flight prices and options.

I visited Belitung in December, during the monsoon season, so the weather and water wasn’t the best. I was so envious when the local photographers showed us their photos of Belitung in peak season – all clear skies and jeweled blue waters! So make sure you go when the island is at its most glorious: the best time to visit Belitung is between May-August.

How to get around Belitung (+Belitung map)

To travel Belitung, you’ll need to rent a scooter/motorcycle or a car, as there is no established public transport system on the island. Belitung Car Rental is a registered company that offers all of the above, as well as cars with drivers. For airport pickup and dropoff services, try Street Taxi Belitung: it’s the only licensed metered taxi service on the island, cheaper than the one-off rate of Belitung airport taxis.

Ready to plan your Belitung trip? Get my Belitung map with all the Belitung activities and attractions mentioned in this guide.

If you don’t intend to go too far from Tanjung Pandan, you’ll be pleased to know that most hotels offer well-maintained rental bicycles. The rates may vary slightly, but should hover around INR 45,000 for 3 hours.

You can expect for Belitung island tourism to go on the rise, as the Indonesian government is pushing for it to become the next tourist hotspot. Would you visit Belitung? What else would you like to know or share about Belitung? Let me know by leaving a comment.