This Is How Hakodate Will Steal Your Heart

“Hakodate or Sapporo?” That’s a question asked by many first-timers to Hokkaido, myself included. Now that I’ve been to both cities, here’s why Hakodate has my vote.

I didn’t fall in love with Hakodate (函館市) at first sight. Up on Mount Hakodate, gazing down at the widely acclaimed Hakodate night view, all I knew was that I enjoyed neither the faraway city lights nor the hordes of tourists seemingly superglued onto the railings. It was the geography, the way land stretched across water, that made the view stunning.

The next day, however, I was soon enamored. Being here in Hokkaido on assignment, my fellow travelers and I were met by local expert Nori-san from the Hakodate Goodwill Guide Association, who captivated us with stories about the city and showed us the best of Hakodate in one day.

All the things to do in Hakodate recommended here may seem like typical tourist stops at first, but after visiting myself and planning a trip to Hokkaido for my mom, I know each one unlocks an important piece of Japanese history. Go there, and you’ll understand why.

The Hakodate Morning Market (Hakodate Asaichi) is pretty much heaven for seafood lovers. This is where you can find top-quality fresh and processed seafood changing hands, as well as fruit and vegetables from local farms. The Japanese take great pride in their produce and it shows – both in their sumptuous size and full flavor.

You should definitely visit Hakodate Morning Market on an empty stomach, and I recommend starting the day with a fresh kaisendon (seafood rice bowl), especially between May to September, as that’s the season for my favorite uni (sea urchin). There’s also the option to try squid fishing from a tank, and the stall owner will turn your catch into fresh ika somen (squid sashimi “noodles”). Be warned: the slices of squid will wriggle when you dip it in the soy sauce, due to spasms caused by the sodium.

** Many stalls have an explicit no-photography policy. Respect this! Even if there’s no sign, ask for permission from the stallholder first before snapping away.

When it comes to city views, I’ve always preferred the detail found at street level. In Hakodate, it’s the Bay Area that enchants me with the call of seagulls and gentle sea breeze. Around each corner is a new composition of how land, sea, and sky meet, sometimes completed by a couple walking hand-in-hand.

In nearly every shot of the Hakodate bay area, you’ll see Kanemori Red Brick Warehouse. Back in 1859, when Hakodate port opened to international trade, this cluster of seven warehouses was crammed with marvelous imports from all over the world, soon to be introduced to the Japanese. Today, however, the reverse is true: Kanemori Red Brick Warehouse is now a pretty shopping arcade filled with restaurants and souvenir stores where you can taste and take home the best of Hokkaido. My pick? Hakodate shio (salt) instant ramen!

Learn how Hakodate met the world at Motomachi

It was during my stroll around Motomachi neighborhood that I learned how Hakodate became such a unique city in Japan. Our first stop was Motomachi Park, where Nori-san led us to a bronze statue.

“This is Commodore Matthew C. Perry, the man who ended Japan’s isolationist foreign policy. Hakodate was one of the first ports to open to foreign trade after the signing of the Convention of Kanagawa in 1854. This neighborhood, Motomachi, is where foreign residents of Hakodate used to live.”

Indeed, Motomachi bears a subtly European aesthetic. Victorian lampposts line the immaculate cobblestone streets, buildings are painted in pastel hues, and some homes feature elements of European design, like bay windows. Yet, most of the buildings here were rebuilt after 1907, when a massive fire razed most of the city. (Hakodate has been besieged by fire numerous times, most recently in 1934, thanks to strong winds from the sea.)

The unmissable mansion near the top of the hill is the Old Public Hall of Hakodate Ward. Once used to host foreign dignitaries and members of the Imperial family, its rooms have been preserved for viewing but it also hosts free concerts and performances for the city’s residents. ** It is closed as of October 2018 for ~2 years for structural maintenance against earthquakes.

We passed wide and steep slopes that rolled all the way to Hakodate bay, like Hachimanzaka and Daisanzaka (where zaka means slope). I couldn’t help but giggle when Nori-san declared that the latter is one of the top 100 roads in Japan, as I thought of someone visiting all of the country’s roads to evaluate their beauty. 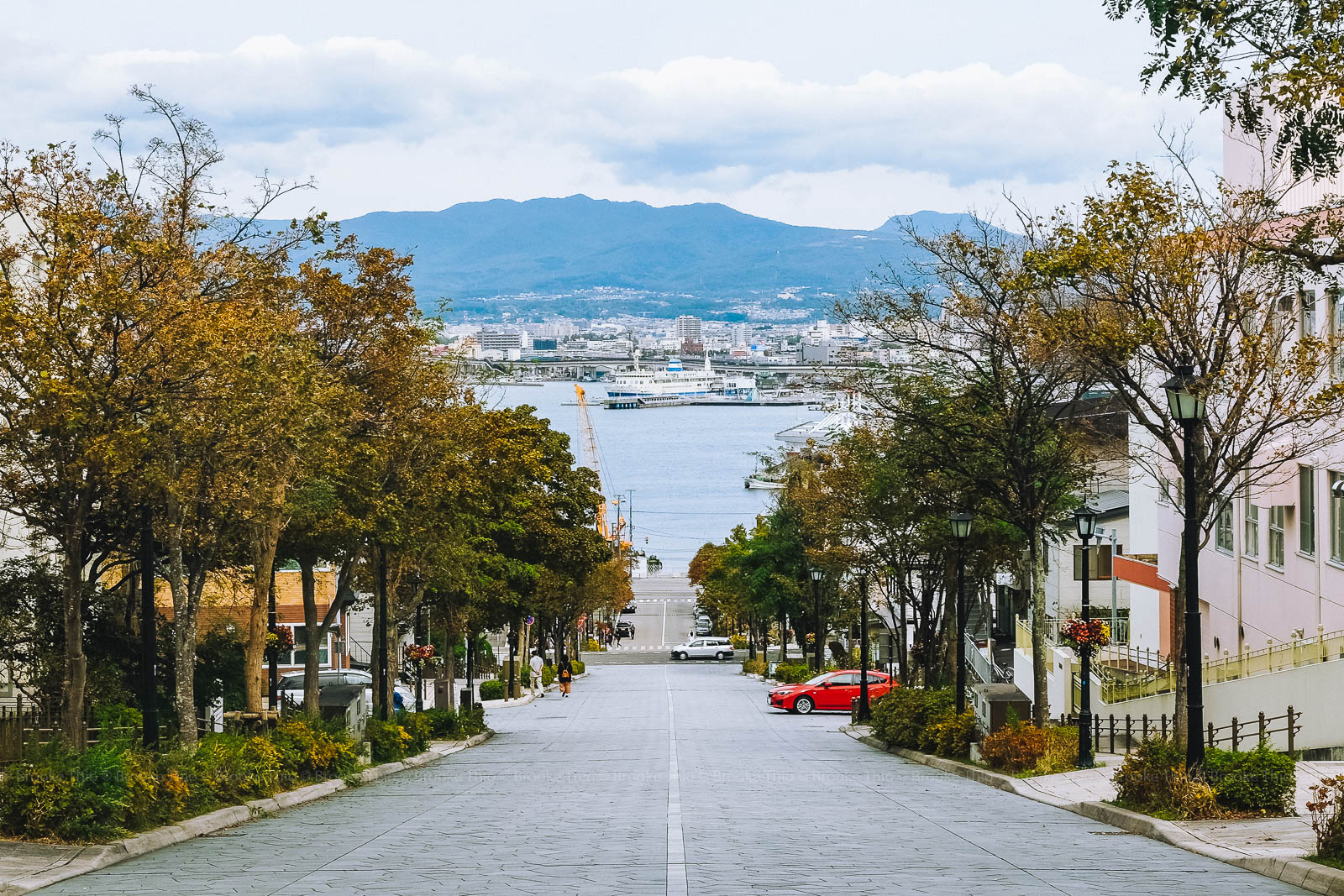 As we walked on, Nori-san pointed out an Orthodox church and a Catholic church standing across the street from each other, as well as a massive Buddhist temple built with concrete. The choice of material was due to Hakodate’s fire-prone location, but it also made this the first Buddhist temple of its kind in Japan.

Motomachi neighborhood is also where you can ride the Mount Hakodate Ropeway and watch the panorama of the city unfold before your eyes. Alternatively, consider hiking up and taking the Hakodate Ropeway down!

Thanks to a global shift towards recognizing the rights of indigenous peoples, the tourism industry has observed growing interest in indigenous history and culture, from people like you and me. There are a few museums in Hokkaido dedicated to Ainu culture, including the Hakodate City Museum of Northern Peoples. But who are the Ainu?

In the early days of the Edo period, when the shogunate and daimyō (feudal lords) held power over Japan, Hokkaido did not even exist on the map. It was called Ezo, Japanese for “foreigner”, and was known as the home of the indigenous Ainu people. As the Japanese gained control over southern regions like Hakodate, however, the Ainu gradually lost negotiating power in trade and even succumbed to diseases brought in by westerners like – you guessed it – smallpox.

During the Meiji Restoration, Ezo was officially annexed and renamed Hokkaido, and the Ainu were forced to assimilate into Japanese society. It was only in 2019 that the Ainu were legally recognized as an indigenous people by the Japanese government, and by now many Ainu have already lost their ancestry to generations of oppression.

If this brief introduction to the Ainu has stirred your soul, pay the museum a visit. Entry only costs ¥300 for adults and ¥150 for children.

Before it became a public park, Goryokaku was an European-style star fort built in 1866 by the Tokugawa shogunate. Nori-san shared that by that time, the Edo period was already coming to a tumultuous end and southern Hokkaido was the shogunate’s last stronghold. Just three years later, the shogunate’s rebel army was finally defeated by the imperial army right here in the Battle of Hakodate (or Battle of Goryokaku), marking the triumph of Japan’s Meiji Restoration.

Goryokaku Park is most popular during springtime, as it’s the most popular spot for seeing cherry blossoms in Hokkaido. As you wander the grounds of the park, you’ll also come across the Hakodate Magistrate’s Office, which was restored in 2010 using the same traditional techniques as the original building.

There’s also the option to get a better view of the fort, which happens to remind me of Copenhagen’s Kastellet, from Goryokaku Tower (entrance fee: ¥900 for adults / ¥450-680 for students / free for children under 5).

Soak in an onsen with infinite sea views

No visit to Japan would be complete without an onsen (hot spring) experience. Hokkaido’s top onsen resort area, Yunokawa Onsen, is unique in that it’s right next to the ocean. Imagine soaking in an onsen while gazing out to the sea – it’s the ultimate experience of tranquility.

If you’re on a budget or uncomfortable with getting naked in an onsen, visiting Yunokawa is still worthwhile as there are several ashiyu (public footbaths) located around the city. In fact, there’s a free one located right outside Yunokawa Onsen tram stop! The photographer in me, however, recommends visiting the Hakodate City Tropical Botanical Garden nearby for a chance to catch the local Japanese macaques (snow monkeys) bathing in the garden’s hot spring pool.

Hokkaido’s claims to foodie fame are numerous, thanks to its agriculture and dairy industry. (The seafood is also incredible, of course.) Its top product? Hokkaido milk, which means a must-have dessert here is Hokkaido milk ice cream (locally known as soft cream).

When a JNTO rep saw how excited I was about Hokkaido soft serve, she shared a personal tip: Hakodate has better soft cream than Sapporo. If you want to test this yourself, there’s no better place than Motomachi neighborhood’s Minatogaoka Street – the main street you’ll stroll along during your visit. It’s lined with so many ice cream shops that locals call it Soft Cream Street!

I couldn’t possibly try all the flavors, so I chose a lavender soft cream…and the fresh Hokkaido milk tasted divine. Other popular soft cream parlors include Hokkaido Farm at Hakodate Morning Market (famous for their squid ink soft cream), and the shop at Goryokaku Tower atrium (has a sakura flavor soft cream sold only in springtime).

Hakodate’s beauty surrounds you from all directions – even from beneath your feet. As you explore the city on foot, make sure to look down every once in a while, as that’s how I found some cool street art in the form of manhole covers.

Some of the manhole covers are painted while others aren’t, but nearly all of them will feature designs unique to the city. In fact, many of Japan’s cities have their own artistic manhole covers.

Where to stay in Hakodate

Heiseikan Shiosaitei ($$$). This ryokan at Yunokawa Onsen offers public baths with ocean views, but if you want a touch of luxury, rooms with private baths are also available.  Check reviews and availability.

SHARE HOTELS HakoBA Hakodate ($). This poshtel offers dorm beds as well as private twin, double, and family rooms which are always quickly snapped up – so reserve well in advance! Check reviews and availability.

Hakodate is located at the southern “tail” of Hokkaido, so getting to Hakodate is a bit of a challenge for most visitors who fly into Hokkaido via New Chitose Airport, near Sapporo.

Come 2031, the Hokkaido Shinkansen will be extended to Sapporo. Until then, you’ll need to take the regular JR (Japan Rail) train from Sapporo to Hakodate (~4 hours, ¥8,830). Alternatively, Hakodate is connected to the main island of Honshu via the Seikan Tunnel, with Shinkansen services available from as far as Tokyo (~5½ hours, ¥22,260). But don’t balk just yet – as always, Japan’s rail passes make transport much more affordable.

With the flexible 6-day JR East-South Hokkaido Rail Pass, you can take unlimited train rides along eastern Japan all the way to Hakodate, as well as from Hakodate to parts of southern Hokkaido like Lake Toya, Noboribetsu, Otaru, Sapporo, and New Chitose Airport. Purchase the pass online for ¥26,000 (¥1,000 cheaper than buying in Japan).

Alternatively, if you’re planning an adventure around Hokkaido, the JR Hokkaido Pass will get you all the way to northern and eastern Hokkaido. I recommend the 4-day flexible pass for ¥22,000, but there are also consecutive-day options.

Most of Hakodate’s main attractions are around Hakodate Bay, and this area is easily walkable. However, taking the classic Hakodate tram is an experience not to be missed. The tram will also take you to Yunokawa Onsen, which is located further east from the Bay Area. ** To visit Goryokaku, take the tram to Suginamicho Station. Do not take the JR train to Goryokaku Station as it’s much farther away.