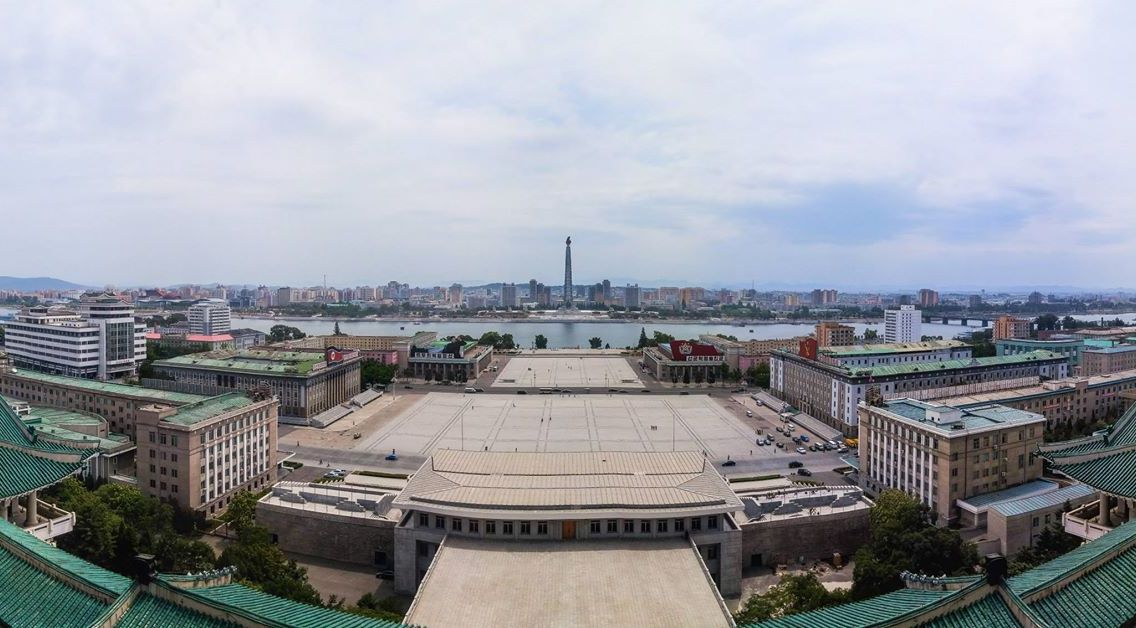 My indoctrination began before I’d even arrived in Pyongyang, on the Air Koryo flight from Beijing. As soon as our plane was off the ground the little overhead screens found on most short-haul flights fell open like dominoes and flashed on with what appeared to be a concert recording.

The opening tune proved to be a catchy and popular one that I heard several times during the trip. I later learned that this was the Moranbong Band, a modern all-girls group formed by order of Kim Jong Un.

Even up to the moment before boarding our flight, I couldn’t believe I was really going to North Korea. Once I arrived in Pyongyang however, I forgot everything I had read or heard about because it was so unlike what the world had portrayed it to be. Regardless of what is true and what lies beneath the surface, this is life as I observed it in Pyongyang.

The first thing our group noticed was that the apartment buildings in Pyongyang resemble those in Singapore’s older residential estates, at least on the outside. From what I could tell, some of these apartments had front windows backed by yet another set of windowed walls, forming a sort of narrow enclosed balcony in between. The newer high-rise pigeonholes have open balconies, many displaying potted plants and solar panels drinking in the sunlight. Smart way to get off the grid and avoid the frequent power cuts in the city (I experienced blackouts every night at the Yanggakdo and Koryo hotels).

We’re told that the apartments have ondol (traditional Korean floor heating) and that buildings above six stories high have elevators. Every neighborhood is serviced by the same assortment of state-owned shops on the ground floor: Photo Studio, Clothing Store, Florist, Restaurant 1 and Restaurant 2. The city center seems to offer more variety, with larger department stores and eateries. We even went shopping in the Gwangbok Department Store. 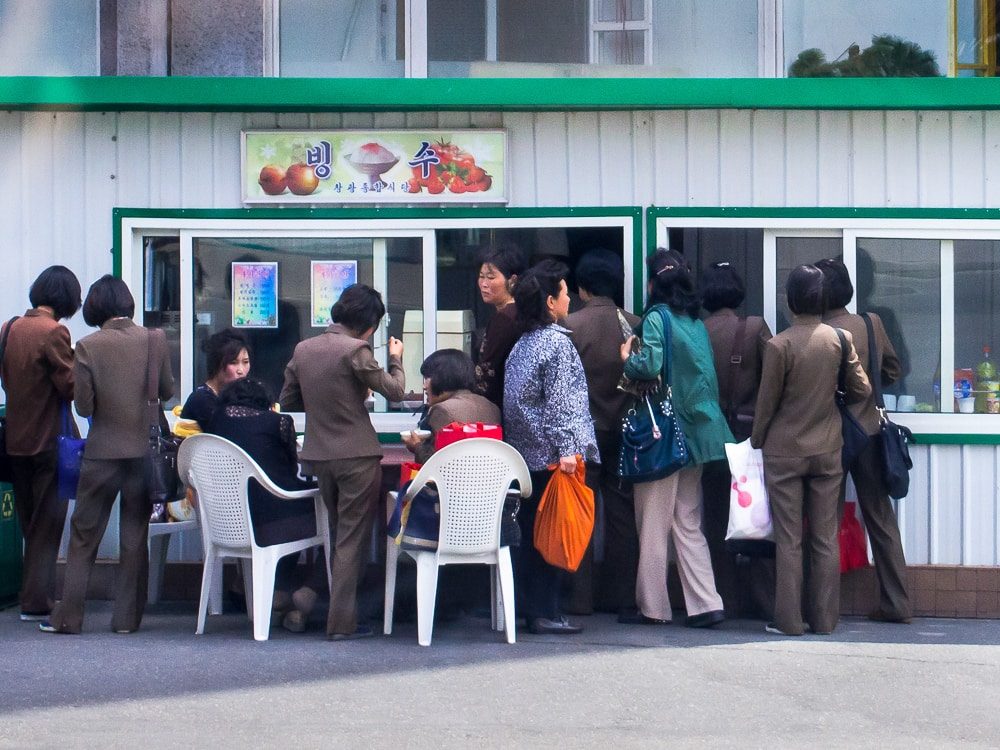 Housing, healthcare, and education are free in North Korea and apartments are allotted to families based on their social standing: married couples living with their parents get bigger apartments, older residents can request for units on lower stories, and teachers at the prestigious Kim Il Sung University and Kim Chaek University, are awarded cushy “gift apartments”.

Pyongyang is one of the cleanest cities I’ve ever been to. There’s no sight or smell of garbage, no potholes, and not a single fallen leaf. Our guides explain that residents are organized into work units and assigned to clean the areas around their estate before or after work.

Sunday afternoons in Moranbong Park seemed rather lively, with people picnicking on the grass and playing in streams. Like all other tourists we came upon the Pubyok Pavilion where a seniors’ dance party was in progress. 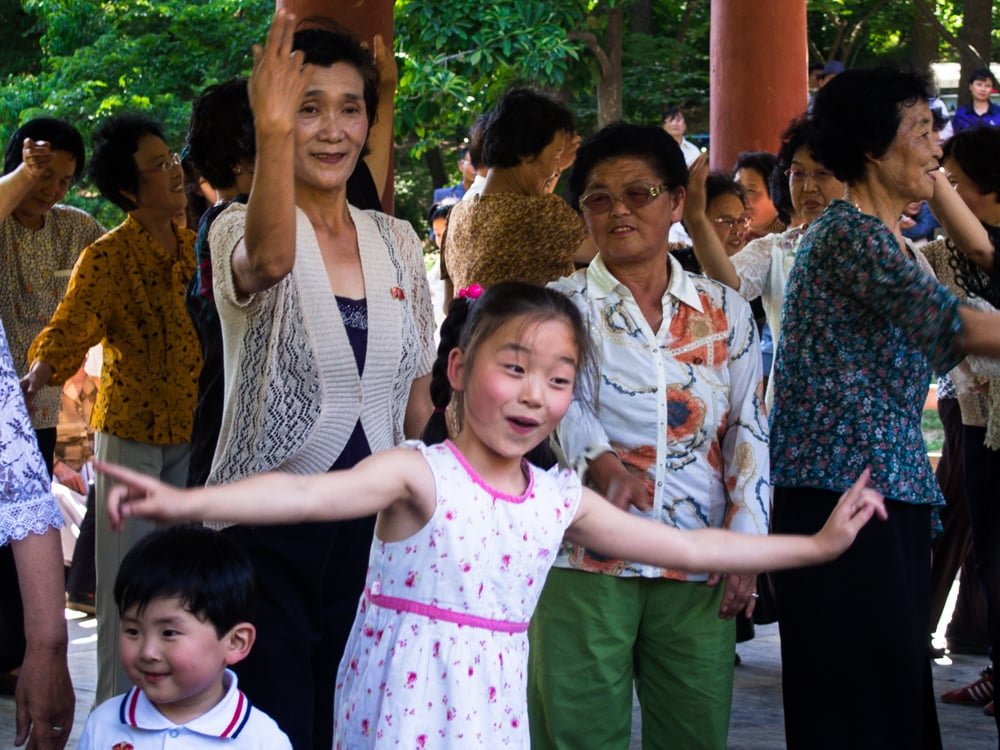 As we watched in delight, some of us were pulled onstage by the ajummas to twirl along. While some have claimed that this scene is staged for tourists, the locals seemed to be enjoying themselves and halfway through the music was even cut off – for the emcee to yell at people to get off the grass. Real or not, it was entertaining and it was precious time spent with the locals.

According to our guide, the electric trams, trolleybuses, and metros cost 5 won per ride, while taxis went by a metered rate of 50 won/km. 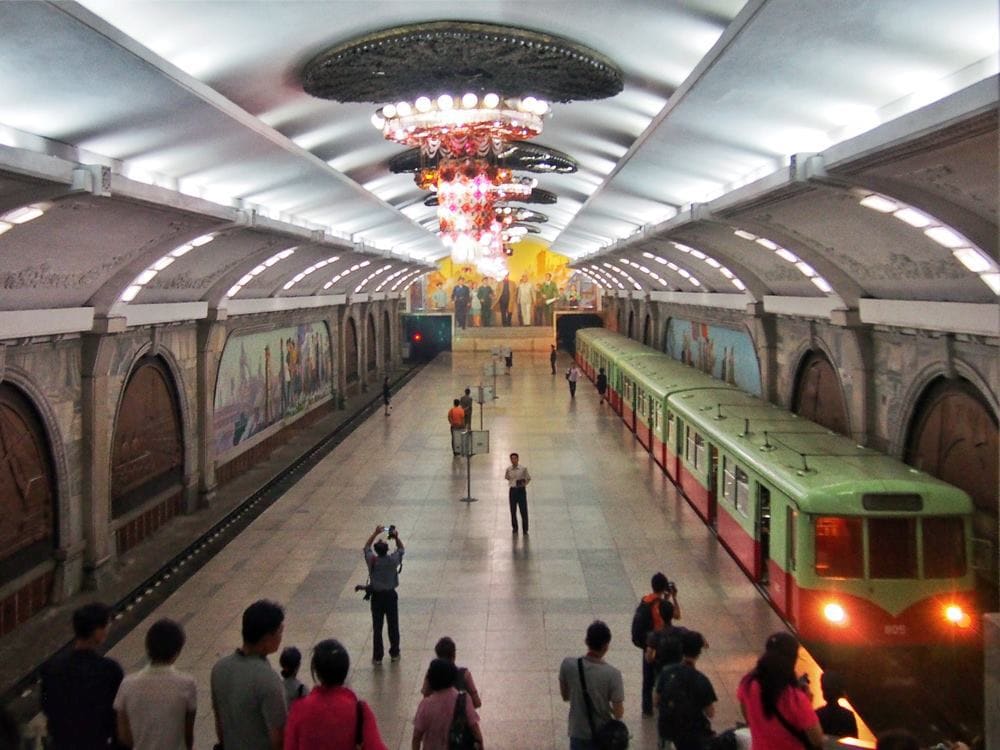 Descending the 110 meters underground to Puhung (부흥) station, I could smell the dampness in the cold air. The Pyongyang Metro, which opened through the 1970s and 80s, also serves as a bomb shelter.The stations, while old, haven’t completely lost their grandeur and seemed better-maintained than, say, Berlin’s U-Bahn.

I was also fortunate that our group got an exclusive treat: a ride on Pyongyang’s best tram. The city’s first tram line opened in 1991 and expanded to 3 lines, operating from 6.00am-midnight each day and 24 hours on public holidays.

Each driver is apparently assigned to one tram and each distance star on the side of the tram represents 50km traveled without accident. No doubt the locals waiting at crowded tram stops were perplexed and annoyed by the sight of a near-empty  tram of camera-wielding foreigners that didn’t stop for them, since the metro and trams usually arrive every 3-4 minutes in typical socialist order.

There seemed to be more cars on the road compared to what visitors in the past have described, with peak-hour waiting traffic on a major road going 3 to 4 cars deep. Different types of vehicles have differently colored plates: 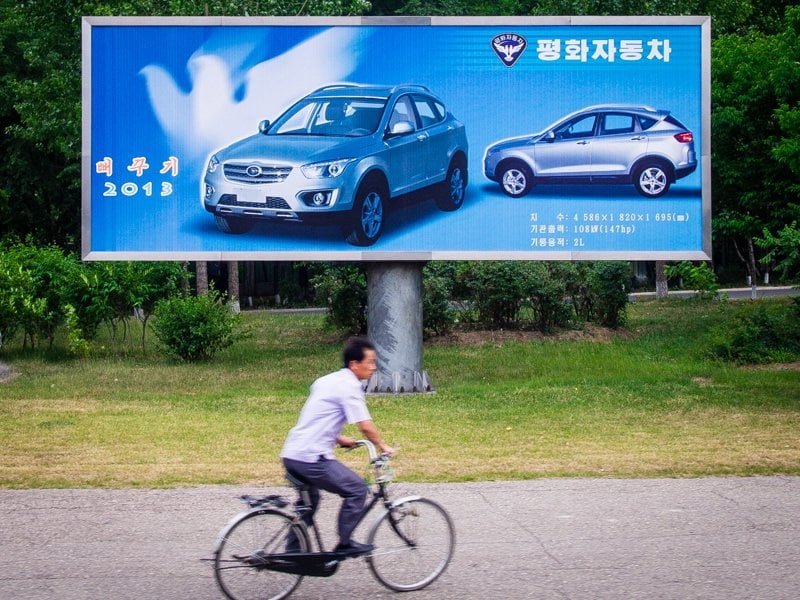 North Koreans today undergo 12 years of compulsory education from: 6 years of elementary school, 3 years in middle school and 3 years in high school. Children typically receive their badges and join the Kim Il-Sung Socialist Youth League at 14 – before that they’re part of the Young Pioneer Corps.

How to Go Strawberry Picking in South Korea

Hopefully the last #throwback for a while and I'll be more active soon. A group of students somewhere in #Pyongyang, in uniform and the iconic red scarf – but pay attention to the shoes on their feet. #DPRK #NorthKorea #Korea #travel #instatravel #travelgram #wanderlust #traveldeeper #bbctravel #mytinyatlas #natgeotravelpic #passionpassport #igsg #tbt

Talented children are usually selected by the state to study multiple foreign languages, computers and IT, and perhaps eventually gaining privileged status in Pyongyang. Students in Pyongyang’s Kim Il Sung University and Kim Chaek University are the cream of the crop. Gifted sportspeople or arts performers attend special schools like the Schoolchildren’s Palace.

Fronting the center of the city at Kim Il-Sung Square is the traditional-style Grand People’s Study House, North Korea’s biggest and most extensive library where one can find foreign journals and publications – 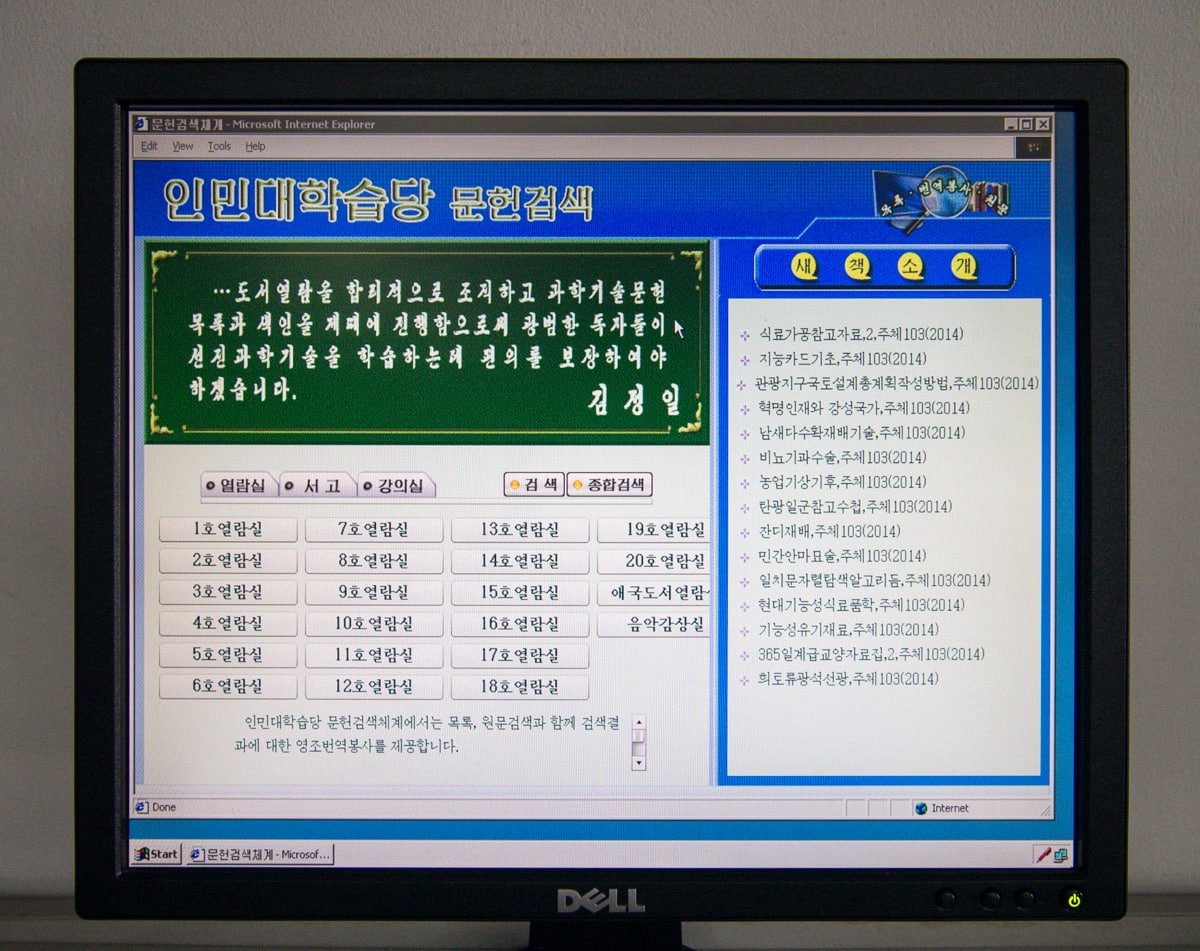 although access is granted only to a select elite in Pyongyang.

Beyond the cavernous atrium are numerous lecture halls, reading rooms, and even consultation rooms where visitors can meet with professors. The government encourages continual education in the form of work-study or correspondence study, and visitors can book lecture slots through the library’s e-portal.

One aspect of Pyongyang doesn’t seem to receive its fair share of interest from foreigners: its local media. Most people are more curious about what North Korea looks like, but the reason North Korea is so unique in this world is the amount of control over what its people know – even Kim Jong-Il apparently stressed that “I rule through music and literature.”

It’s easy to dismiss the abundance of propaganda messages here because it’s all in a foreign language. But try to imagine each propaganda sign, poster, and mosaic as an advertising billboard convincing you of the joys of consumerism, and you should be able to relate (after all, advertising is full of propaganda). The song at the beginning of this post was likely specially composed to reinforce Kim Jong-Un’s status by praising him in an indirect manner, but even without knowing the lyrics, a melody is enough to make a song popular – just like K-Pop in the west.

Yes, Pyongyang is the most developed city in North Korea, built for tourists and elite citizens. Once you’ve been here, however, you’ll realize the idea that all of Pyongyang’s 2.5 million residents is in on some choreographed show is preposterous. So is the conjecture that North Koreans are brainwashed and blindly obedient subjects.

I expected Pyongyang’s surrealism to hit me in the face the moment I arrived, but instead it crept up on me. When one thinks about it, isn’t strangeness merely a matter of relative difference from what is familiar to us? In that sense, perhaps to Asians like myself, the city is less startling than it appears to a Caucasian.

It was only on the last few days that I started feeling trapped. When we finally returned to Beijing, I felt a great sense of relief. Not only because I could finally be reconnected with the rest of the world, but because I could, once again, freely speak my mind.